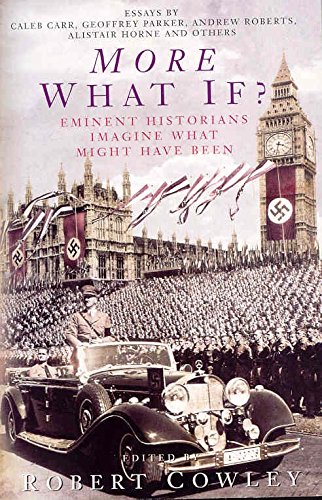 More What If?
by Robert Cowley

In Stock
£2.99
Concentrating on the crucial and the seemingly insignificant, this is a provocative look at the way our world could easily have been.
Very Good
Only 3 left

More What If? Summary

More What If?: Eminent Historians Imagine What Might Have Been by Robert Cowley

More What If?, the sequel to the acclaimed What If? examines history's most fascinating what-might have-beens. More of the world's leading historians, including Geoffrey Parker, Theodore K Rabb, Cecilia Holland and Caleb Carr postulate on what might so easily have been. Concentrating on the crucial and the seemingly insignificant, What If? 2 is an entertaining and brilliantly provocative look at the way our world could easily have been.What if William hadn't conquered? What if the enigma code remained uncracked? And would this even matter if Lord Halifax had become Prime Minister rather than Churchill? This selection of alternative history is both provocative and stimulating and gives us a valuable insight into the way things could so easily have been.Praise for the What If? series

"Anyone interested in...History in general will find it fascinating to read" Spectator

More What If? Reviews

Robert Cowley is the Editor-in-Chief of MHQ: The Quarterly Journal of Military History - the best popular history magazine in the United States. The authors are some of the best known British and American historians writing today.

GOR000457997
More What If?: Eminent Historians Imagine What Might Have Been by Robert Cowley
Robert Cowley
Used - Very Good
Paperback
Pan Macmillan
2003-03-07
448
0330487256
9780330487252
N/A
Book picture is for illustrative purposes only, actual binding, cover or edition may vary.
This is a used book - there is no escaping the fact it has been read by someone else and it will show signs of wear and previous use. Overall we expect it to be in very good condition, but if you are not entirely satisfied please get in touch with us.