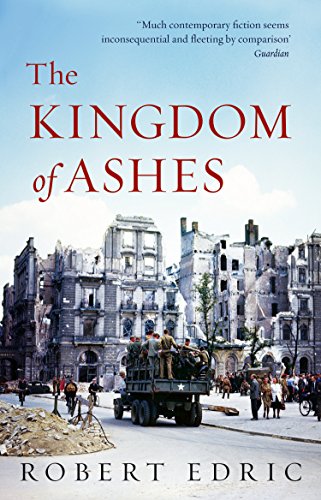 The Kingdom of Ashes
by Robert Edric

In Stock
£2.99
Three hundred miles north, in the Rehstadt Institute, a British "Assessment and Evaluation" centre, Alex Foster interrogates a succession of lesser war criminals, exploring their pasts and their crimes, and deciding their futures in the soon-to-be-reborn Germany.
Very Good
Only 2 left

The Kingdom of Ashes Summary

The Kingdom of Ashes by Robert Edric

Germany, spring 1946. The Nuremberg Trials are underway. Three hundred miles north, in the Rehstadt Institute, a British "Assessment and Evaluation" centre, Alex Foster interrogates a succession of lesser war criminals, exploring their pasts and their crimes, and deciding their futures in the soon-to-be-reborn Germany. But Rehstadt, a town largely untouched by the war, is a place of old hostilities and burnished hatreds; a place still not entirely at peace; a place where the certainties of the past are still weighed favourably against the deprivations of the present and the vague, uncertain promises of the future. As spring progresses, and as events in the wider world quicken to their own closely observed conclusion, Alex Foster finds himself at the centre of a conflict involving British, American and German interests; and for the first time in his career he also finds himself compromised - forced into subterfuge and deceit as he struggles to weigh personal convictions and loyalties against the greater political and military good...

The Kingdom of Ashes Reviews

"An impressive tale of love and death in wartime...much contemporary fiction seems inconsequential and fleeting by comparison" * Guardian *
"Edric handles the many characters and threads of this complex novel with skill...[his] consistent brilliance is astounding" * Literary Review *
"His descriptions are masterful" * Scottish Sunday Herald *
"A novel of a particular time and place, but one that poses timeless questions...Very satisfying...He is at his best here" * The Scotsman *
"Compelling...Edric has a flawless sense of pace, and an intuitive grasp of character" * Sunday Times *

Robert Edric was born in 1956. His novels include Winter Garden (1985 James Tait Black Prize winner),A New Ice Age (1986 runner-up for the 1986 Guardian Fiction Prize), A Lunar Eclipse, The Earth Made of Glass, Elysium, In Desolate Heaven, The Sword Cabinet, The Book of the Heathen (shortlisted for the 2001 WH Smith Literary Award), Peacetime (longlisted for the Booker Prize 2002) and Gathering the Water (longlisted for the Booker Prize 2006). His latest novel, In Zodiac Light, is now available from Doubleday.

GOR001147835
The Kingdom of Ashes by Robert Edric
Robert Edric
Used - Very Good
Paperback
Transworld Publishers Ltd
2008-07-14
480
0552774170
9780552774178
N/A
Book picture is for illustrative purposes only, actual binding, cover or edition may vary.
This is a used book - there is no escaping the fact it has been read by someone else and it will show signs of wear and previous use. Overall we expect it to be in very good condition, but if you are not entirely satisfied please get in touch with us.