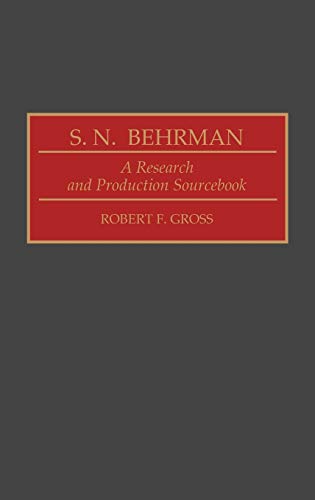 In Stock
£45.99
Contains extensive plot summaries and critical overviews each of Behrman's 51 plays and provides a record of his work, published and unpublished, including plays, filmscripts, fiction and essays. The book also examines the critical response, both reviews and analytical studies.
Very Good
Only 1 left

Behrman's prolific career as a Broadway playwright and Hollywood screenwriter spans a period from the 1920s to the mid-1960s. As a writer for popular performance, he had to contend with commercial influences and with producers and directors involved in the dynamics of the collaborative process. Though eminently successful, his works have not received adequate critical scrutiny. His ouevre probably will never be fully determined because of collaboration, numerous rewrites, and the many unpublished and unproduced plays and scripts.

Author Robert F. Gross here provides an immensely detailed record of the primary materials, published and unpublished, including plays, filmscripts, fiction, and essays, and of the critical response, both reviews and analytical studies. Focusing on Behrman as a dramatist, Gross has written extensive plot summaries and critical overviews for each of fifty-one plays. Where applicable, full production credits are given for premieres and revivals, and references are made to reviews and commentary about specific productions as well as to the plays in general. The annotated secondary bibliography is divided into chronologically organized sections for reviews and for books, parts of books, and articles. Fully cross-referenced, the material is also accessible through an author index to the secondary bibliography and a general subject index. In an opening appraisal, Gross expresses his appreciation for Behrman, whose high comedies he finds to be informed by a probing ethical conscience and whose goal of scrupulosity he emulates in his own work. This scrupulous playwright is here given his due in a comprehensive sourcebook of value for theatre historians and theatre professionals.

ROBERT F. GROSS is Associate Professor of English and Comparative Literature and Director of Theatre at Hobart and William Smith Colleges, where his focus is on twentieth-century drama. His publications include Christopher Hampton: A Casebook, Words Heard and Overheard, and articles in Modern Drama, Essays in Theater, and Theatre Studies.

GOR010199177
S. N. Behrman: A Research and Production Sourcebook by Robert F. Gross
Robert F. Gross
Modern Dramatists Research and Production Sourcebooks
Used - Very Good
Hardback
ABC-CLIO
1992-10-20
224
0313278520
9780313278525
N/A
Book picture is for illustrative purposes only, actual binding, cover or edition may vary.
This is a used book - there is no escaping the fact it has been read by someone else and it will show signs of wear and previous use. Overall we expect it to be in very good condition, but if you are not entirely satisfied please get in touch with us.