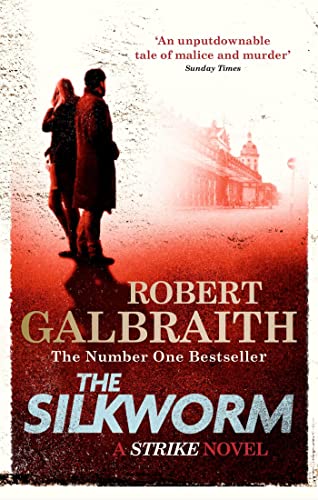 The Silkworm by Robert Galbraith

The second book in the highly acclaimed crime fiction series by J.K. Rowling, writing under the pseudonym Robert Galbraith.

'Teems with sly humour, witty asides and intelligence ... A pleasure to read' TIMES

When novelist Owen Quine goes missing, his wife calls in private detective Cormoran Strike. At first, she just thinks he has gone off by himself for a few days - as he has done before - and she wants Strike to find him and bring him home.

But as Strike investigates, it becomes clear that there is more to Quine's disappearance than his wife realises. The novelist has just completed a manuscript featuring poisonous pen-portraits of almost everyone he knows. If the novel were published it would ruin lives - so there are a lot of people who might want to silence him.

And when Quine is found brutally murdered in bizarre circumstances, it becomes a race against time to understand the motivation of a ruthless killer, a killer unlike any he has encountered before . . .

A compulsively readable crime novel with twists at every turn, The Silkworm is the second in the highly acclaimed series featuring Cormoran Strike and his determined young assistant Robin Ellacott.

*** The latest book in the thrilling Strike series, LETHAL WHITE is out now! ***

PRAISE FOR THE STRIKE SERIES:

'The work of a master storyteller' DAILY TELEGRAPH

'Will keep you up all night' OBSERVER

An unputdownable tale of malice and murder in a toxic literary world . . . this almost preposterously compulsive page-turner is irresistible summer reading * Sunday Times *
Teems with sly humour, witty asides and intelligence ... A pleasure to read * The Times *
A damn good read ... It's a book to gulp down * Telegraph *
Huge credit is due to Galbraith in portraying [Strike] so vividly . . . Galbraith has pulled off a thoroughly enjoyable classic and I'm already looking forward to Strike's next outing * Peter James, Sunday Express *
A superb and polished thriller . . . an ingenious whodunit * Sunday Mirror *
Pacy, unputdownable . . . I can't wait for the next one * Daily Express *
An enticingly macabre whodunit ... taut and believable * Metro *
You are absolutely carried along ... Well written, exciting * Front Row, BBC Radio 4 *
A great detective novel: sharp, immensely readable, warm-hearted but cool-headed ... populated with dozens of memorable characters * USA Today *
Enthralling, not only for its twists and turns, but for the fun of the teamwork * Time Magazine *
An atmospheric, propulsive narrative * Metro *
An entertaining novel in which the most compelling characters are not the killer or the victim, but the detectives charged with solving the crime * New York Times *
A pacey detective story ... moreish * Independent *
Fast-paced and entertaining ... Strike has all kinds of potential. It'd be a crime not to keep up with him * Daily News *
Galbraith brings flair and wit to [his] reflections on the state of contemporary publishing ... [He] takes the existing strengths of the genre and uses them as the building blocks for [his] own considerable storytelling gift, crafting books crammed with memorable characters that make irresistible reading ... There are aspects of the traditional English crime novel reaching right back to the golden age of Christie, Sayers, Allingham and Marsh ... The Cuckoo's Calling was a calling card for a series that has legs * Val McDermid, Guardian *
If [Galbraith] had as much fun writing The Silkworm as I did reading it, [he] had a blast * LA Times *
An absorbing puzzle with vivid characters . . . Robert Galbraith deserves the inevitable bestseller * Scotland on Sunday *
An intelligent and captivating drama driven by fascinatingly real characters. This is storytelling at its very best * Heat *
Bring on the next one, please ... [Galbraith] writes with wit and affection for detective-novel tradition ... and races us through a twisty plot so smoothly that you won't notice as the hours tick by * Seattle Times *
The Silkworm is a deeply satisfying work of crime fiction, more complex and darker than its predecessor * The Australian *
A gimlet eye for detail and beautifully crafted plot make it a delight from start to finish, and a perfect summer read * Daily Mail *
A properly addictive whodunit. And in the unlikely pairing of ungainly Strike and his clever young assistant, Galbraith has created an investigative duo with spark and empathy * Financial Times *
Robert Galbraith is a pseudonym for J.K. Rowling, bestselling author of the Harry Potter series and The Casual Vacancy. All four Strike novels, The Cuckoo's Calling, The Silkworm, Career of Evil and Lethal White, topped the national and international bestseller lists and the series has been adapted for television, produced by Bronte Film and Television.
GOR006341844
9780751549263
0751549266
The Silkworm: Cormoran Strike Book 2 by Robert Galbraith
Robert Galbraith
Used - Very Good
Paperback
Little, Brown Book Group
2015-01-29
592
Winner of Audible Sounds of Crime Award at Crimefest 2015 (UK) Winner of US Audie Awards 2015 (UK) Short-listed for CWA Goldsboro Gold Dagger 2015 (UK) Long-listed for IMPAC Dublin Literary Award 2016 (UK)
Book picture is for illustrative purposes only, actual binding, cover or edition may vary.
This is a used book - there is no escaping the fact it has been read by someone else and it will show signs of wear and previous use. Overall we expect it to be in very good condition, but if you are not entirely satisfied please get in touch with us
Trustpilot