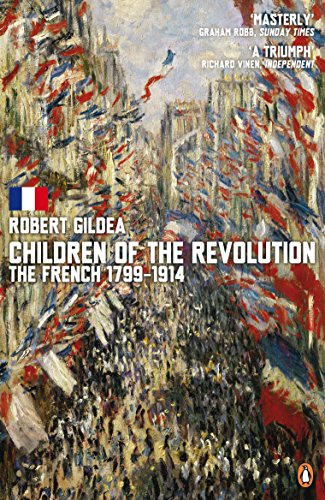 Children of the Revolution
by Robert Gildea

In Stock
£12.99
Nineteenth-century France was renowned for its literature, philosophy, art, poetry and technology. Yet this was also a century of political anarchy and bloodshed, where each generation of the French Revolution's 'children' would experience their own wars, revolutions and terrors. This book explores various aspects of these rapidly changing times.
Very Good
Only 3 left

Children of the Revolution Summary

Nineteenth-century France was one of the world's great cultural beacons, renowned for its dazzling literature, philosophy, art, poetry and technology. Yet this was also a tumultuous century of political anarchy and bloodshed, where each generation of the French Revolution's 'children' would experience their own wars, revolutions and terrors.

From soldiers to priests, from peasants to Communards, from feminists to literary figures such as Victor Hugo and Honore de Balzac, Robert Gildea's brilliant new history explores every aspect of these rapidly changing times, and the people who lived through them.

Children of the Revolution Reviews

Robert Gildea has spent a lifetime studying modern France. Among his major works are France Since 1945 and The Past in French History. His last book, Marianne in Chains, won the Wolfson Prize for History in 2002. He is Professor of Modern History at the University of Oxford.

GOR002820013
Children of the Revolution: The French, 1799-1914 by Robert Gildea
Robert Gildea
Used - Very Good
Paperback
Penguin Books Ltd
2009-06-04
560
0141016531
9780141016535
N/A
Book picture is for illustrative purposes only, actual binding, cover or edition may vary.
This is a used book - there is no escaping the fact it has been read by someone else and it will show signs of wear and previous use. Overall we expect it to be in very good condition, but if you are not entirely satisfied please get in touch with us.