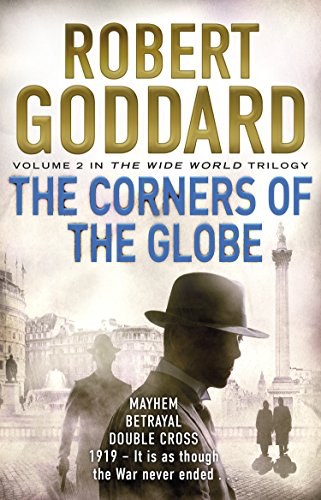 The Corners of the Globe
by Robert Goddard

Used Price
£4.49
New RRP £9.99
Free Shipping in the UK
What that document contains forces him to break cover sooner than he would have wished and to embark on a desperate race south, towards London, with information that could destroy Lemmer - if Max, as seems unlikely, lives to deliver it...
Reviews:
Trustpilot
Very Good Good Well Read

The Corners of the Globe Summary

The Corners of the Globe: (The Wide World - James Maxted 2) by Robert Goddard

Spring, 1919. James `Max' Maxted, former Great War flying ace, returns to the trail of murder, treachery and half-buried secrets he set out on in The Ways of the World. He left Paris after avenging the murder of his father, Sir Henry Maxted, a senior member of the British delegation to the post-war peace conference. But he was convinced there was more - much more - to be discovered about what Sir Henry had been trying to accomplish. And he suspected elusive German spymaster Fritz Lemmer knew the truth of it. Now, enlisted under false colours in Lemmer's service but with his loyalty pledged to the British Secret Service, Max sets out on his first - and possibly last - mission for Lemmer. It takes him to the far north of Scotland - to the Orkney Isles, where the German High Seas Fleet has been impounded in Scapa Flow, its fate to be decided at the conference-table in Paris. Max has been sent to recover a document held aboard one of the German ships. What that document contains forces him to break cover sooner than he would have wished and to embark on a desperate race south, towards London, with information that could destroy Lemmer - if Max, as seems unlikely, lives to deliver it...

Customer Reviews - The Corners of the Globe

The Corners of the Globe Reviews

"The master of the triple double-cross" * The Times *
"A compelling storyteller of our time" * Sunday Telegraph *
"A conjurer...nothing can stop him" * Guardian *

Robert Goddard was born in Hampshire and read History at Cambridge. His first novel, Past Caring, was an instant bestseller. Since then his books have captivated readers worldwide with their edge-of-the-seat pace and their labyrinthine plotting. The first Harry Barnett novel, Into the Blue, was winner of the first WHSmith Thumping Good Read Award and was dramatized for TV, starring John Thaw. His thriller, Long Time Coming won an Edgar in the Mystery Writers of America awards.

GOR006748093
The Corners of the Globe: (The Wide World - James Maxted 2) by Robert Goddard
Robert Goddard
The Wide World Trilogy
Used - Very Good
Paperback
Transworld Publishers Ltd
2015-06-29
512
0552167061
9780552167062
N/A
Book picture is for illustrative purposes only, actual binding, cover or edition may vary.
The book has been read but remains in clean condition. All pages are intact and the cover is intact. Some minor wear to the spine.