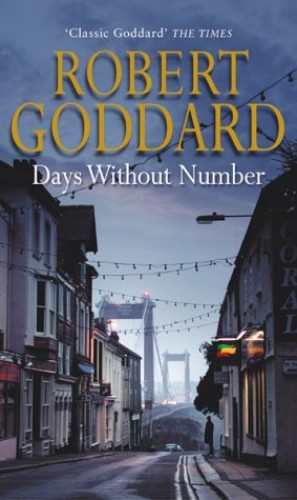 Days without Number
by Robert Goddard

In Stock
£4.49
Nick Paleologus is summoned to the unyielding bosom of his family to help resolve a dispute which threatens to set his brothers and sisters against their aged and irascible father. Why their father was bound at all costs to reject the offer of a house-buyer and what may really be the motives of the prospective buyer.
Very Good Good
9 in stock

Days without Number by Robert Goddard

Nick Paleologus is summoned to the unyielding bosom of his family to help resolve a dispute which threatens to set his brothers and sisters against their aged and irascible father. Michael Paleologus, retired archeologist and supposed descendent of the last Emperors of Byzantium, lives alone at Trennor, a remote and rambling house on the Cornish bank of the Tamar. A ridiculously generous offer has been made for the house, but he refuses to sell despite the urgings of his children, for whom the proceeds would solve a variety of problems. Nick accomplished little in the role of mediator, but the stalemate is soon tragically broken. Only then do Nick and his siblings discover why their father was bound at all costs to reject the offer and what may really be the motives of the prospective buyer. Their increasingly desperate efforts to conceal the truth drag them into a deadly conflict with an unseen and unknown enemy, who seems as determined to force them into a confrontation with their family's past as he is to conceal his own identity. Late in the day, perhaps too late, Nick realizes that the only way to escape from the trap their persecutor has set for them is to hunt him down, wherever - and whoever - he may be. But the hunt involves excavating a terrible secret from their father's archeological career. And once that secret is known, nothing will ever be the same again.

"Goddard is a master of the clever twist."
-- "Sunday Telegraph"
"An absorbing, contemporary thriller with a hint of mysticism. Highly recommended."
"--Good Book Guide
""Fuses history with crime, guilty consciences and human fallibility in a way that makes his books an intelligent escapist delight."
"--The Times
"

Robert Goddard was born in Hampshire. He read History at Cambridge and worked as an educational administrator in Devon before becoming a full-time novelist. His bestselling novels are: Past Caring, In Pale Battalions, Painting the Darkness, Into the Blue (winner of the first WH Smith Thumping Good Read Award and dramatized for TV in 1997, starring John Thaw), Take No Farewell, Hand in Glove, Closed Circle, Borrowed Time, Out of the Sun (a sequel to Into the Blue), Beyond Recall, Caught in the Light, Set in Stone, Sea Change, Dying to Tell and Days Without Number

GOR000484839
Days without Number by Robert Goddard
Robert Goddard
Used - Very Good
Paperback
Transworld Publishers Ltd
2003-12-01
464
0552148784
9780552148788
N/A
Book picture is for illustrative purposes only, actual binding, cover or edition may vary.
This is a used book - there is no escaping the fact it has been read by someone else and it will show signs of wear and previous use. Overall we expect it to be in very good condition, but if you are not entirely satisfied please get in touch with us.