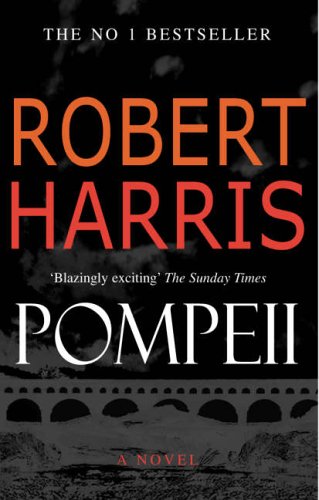 In Stock
£4.49
Through the eyes of four characters - a young engineer, an adolescent girl, a corrupt millionaire and an elderly scientist - Robert Harris brilliantly recreates a luxurious world on the brink of destruction.
Very Good
18 in stock

A sweltering week in late August. Where better to enjoy the last days of summer than on the beautiful Bay of Naples? But even as Rome's richest citizens relax in their villas around Pompeii and Herculaneum, there are ominous warnings that something is going wrong. Wells and springs are failing, a man has disappeared, and now the greatest aqueduct in the world - the mighty Aqua Augusta - has suddenly ceased to flow. Through the eyes of four characters - a young engineer, an adolescent girl, a corrupt millionaire and an elderly scientist - Robert Harris brilliantly recreates a luxurious world on the brink of destruction.

"Blazingly exciting... Harris, as Vesuvius explodes, gives full vent to his genius for thrilling narrative... pulse-rate-speeding masterpieces of suffocating suspense and searing action" * Sunday Times *
"Robert Harris's Pompeii is his best yet: as explosive as Etna, as addictive as a thriller, as satisfying as great history - Simon Sebag Montefiore 'Books of the Year'" * Daily Telegraph *
"Breakneck pace, constant jeopardy and subtle twists of plot... a blazing blockbuster" * Daily Mail *
"Harris has done a tremendous job in evoking life in ancient Italy... I am lost in admiration at his energy and skill" * Mail on Sunday *
"The long drawn-out death agony of the two cities is brilliantly done. Explosive stuff indeed" * Daily Telegraph *

Robert Harris is the author of twelve bestselling novels: the Cicero Trilogy - Imperium, Lustrum and Dictator - Fatherland, Enigma, Archangel, Pompeii, The Ghost, The Fear Index, An Officer and a Spy, which won four prizes including the Walter Scott Prize for Historical Fiction, Conclave and most recently, Munich. Several of his books have been filmed, including The Ghost, which was directed by Roman Polanski. His work has been translated into thirty-seven languages and he is a Fellow of the Royal Society of Literature. He lives in West Berkshire with his wife, Gill Hornby.

GOR000399034
Pompeii by Robert Harris
Robert Harris
Used - Very Good
Paperback
Cornerstone
2004-09-27
416
0099282615
9780099282617
Winner of BookScan Gold Awards 2007
Book picture is for illustrative purposes only, actual binding, cover or edition may vary.
This is a used book - there is no escaping the fact it has been read by someone else and it will show signs of wear and previous use. Overall we expect it to be in very good condition, but if you are not entirely satisfied please get in touch with us.