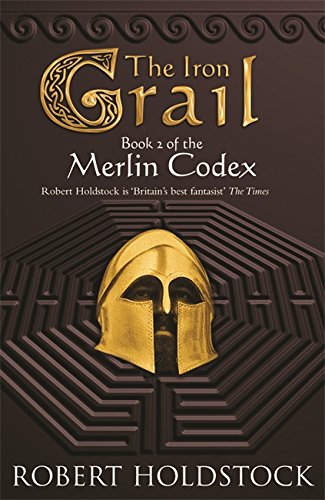 The Iron Grail
by Robert Holdstock

Used Price
£3.79
New RRP £8.99
Free Shipping in the UK
Long before King Arthur is born to rule England, the enchanter Merlin is caught up in a tangled web of magic and mayhem, treachery, truth and heady enchantment
Reviews:
Trustpilot
Very Good

The Iron Grail: Book 2 of the Merlin Codex by Robert Holdstock

Long before King Arthur is born to rule England, the enchanter Merlin is caught up in a tangled web of magic and mayhem, treachery, truth and heady enchantment

Seven centuries have passed since Merlin journeyed with Jason and his Argonauts to find the Golden Fleece. Merlin is immortal, but when he uses the charm that is knit deep in his bones, his body ages - and he has no wish to be old, so rather than squander his magic, he prefers to rely on his own intelligence and cunning.

Now the mage finds himself in Alba, the Island of Mists, beset by enemies both dead and Otherworldly, seeking both the children of the warlord Urtha, who have been kidnapped and taken to Ghostland, and Jason's younger son, Kinos (Little Dreamer), hidden by his enchantress mother, Medea in the Otherworld.

And now Merlin must use not just his own cunning and centuries of knowledge, but also the magic that permeates his body if he is to save his friends from fates truly worse than death itself.

Robert Holdstock gave up his career in medical zoological research to be a full-time writer. His first novel of Ryhope Wood, MYTHAGO WOOD, won the World Fantasy Award. He died in 2009.

GOR001075035
The Iron Grail: Book 2 of the Merlin Codex by Robert Holdstock
Robert Holdstock
Gollancz S.F.
Used - Very Good
Paperback
Orion Publishing Co
2007-01-11
320
0575079746
9780575079748
N/A
Book picture is for illustrative purposes only, actual binding, cover or edition may vary.
This is a used book - there is no escaping the fact it has been read by someone else and it will show signs of wear and previous use. Overall we expect it to be in very good condition, but if you are not entirely satisfied please get in touch with us.