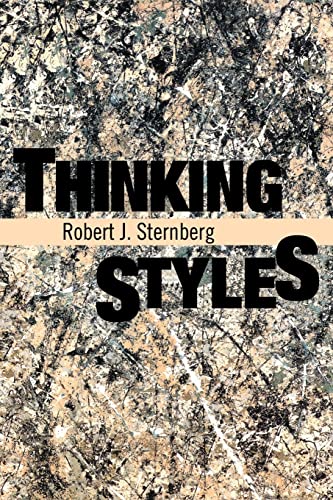 In Stock
£2.49
Using a variety of examples that range from scientific studies to personal anecdotes, Sternberg presents a controversial theory of thinking styles that aims to explain why aptitude tests, school grades, and classroom performance often fail to identify real ability.
Like New Very Good Good
Only 1 left

In our society, the recognition of talent depends largely on idealized and entrenched perceptions of academic achievement and job performance. Thinking Styles bucks this trend by emphasizing the method of our thought rather than its content. Psychologist Robert Sternberg argues that ability often goes unappreciated and uncultivated not because of lack of talent, but because of conflicting styles of thinking and learning. Using a variety of examples that range from scientific studies to personal anecdotes, Sternberg presents a theory of thinking styles that aims to explain why aptitude tests, school grades, and classroom performance often fail to identify real ability. He believes that criteria for intelligence in both school and the workplace are unfortunately based on the ability to conform rather than learn. He takes the theory a step further by stating that 'achievement' can be a result of the compatibility of personal and institutional thinking styles, and 'failure' is too often the result of a conflict of thinking styles, rather than a lack of intelligence or aptitude. Sternberg bases his theory on hard scientific data, yet presents a work that remains highly accessible.

"Sternberg is a prolific and insightful writer. The ideas contained in this book may be useful to educators, employers, and psychologists. The information provided may help those in a position to make decisions about the value of others' contributions more aware of stylistic differences that may have a great deal of impact on performance, but have very little to do with ability...[and] may help sensitize people to recognize the value of differences in mental self-government to help capitalize on those differences." Contemporary Psychology
"[Sternberg's] examples are vivid and practical...Sternberg manages a clear, relatively jargon-free style and has organized his material in a user-friendly way." The Providence Sunday Journal
"[Sternberg's] ideas are provocative...They help explain why some of the very brightest kids flourish only after they've left their days of drab schooling far behind." Teacher Magazine
"A very readable book, which should interest a wide audience including upper-division undergraduates in education, psychology, and sociology." G.C. Gamst, Choice
"This is a thoughtfully constructed book that undertakes a fresh look at cognitive styles....The book is enjoyable and essential for all students, educators, employers, researchers and others interested in cognition and intelligence." Roseanne L. Flores, Readings
"In this stimulating and thought-provoking book, one of today's best-known psychologists provides a fascinating discussion of the many different ways people think and work today." Library and Information Science Annual

GOR010306433
Thinking Styles by Robert J. Sternberg
Robert J. Sternberg
Used - Like New
Paperback
Cambridge University Press
1999-03-13
196
052165713X
9780521657136
N/A
Book picture is for illustrative purposes only, actual binding, cover or edition may vary.
The book has been read, but looks new. The book cover has no visible wear, and the dust jacket is included if applicable. No missing or damaged pages, no tears, possible very minimal creasing, no underlining or highlighting of text, and no writing in the margins.