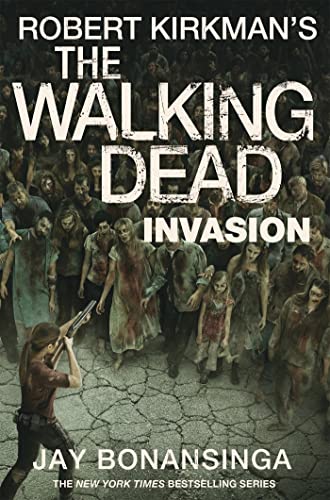 From the ashes of a devastated Woodbury, Georgia, come two opposing camps of ragtag survivors, battling for domination in Invasion by Jay Bonansinga, the sixth novel in the bestselling spin-off series Robert Kirkman's The Walking Dead.

Underground, in the labyrinth of ancient tunnels and mine shafts, Lilly Caul and her motley crew of senior citizens, misfits, and children struggle to build a new life. But a secret ambition still burns inside her: she wants her beloved town of Woodbury back from the plague of walkers, and now the only thing that stands in her way currently roams the wasted backwaters of Georgia . . .

Way out in the hinterlands, amidst the rising tide of walkers pushing in from all directions, the psychotic Reverend Jeremiah Garlitz rebuilds his army of followers with a diabolical secret weapon. Intending to destroy Lilly and her crew - the very people who vanquished his cultish church - he now has the means to bring a special brand of hell down upon the tunnel dwellers.

The final confrontation between these two human factions unleashes an unthinkable weapon - forged from the monstrous hordes of undead, perfected by a madman, and soaked in the blood of innocents.

GOR007972105
Invasion by Robert Kirkman
Robert Kirkman
The Walking Dead
Used - Very Good
Paperback
Pan Macmillan
2016-01-28
304
1447275764
9781447275763
N/A
Book picture is for illustrative purposes only, actual binding, cover or edition may vary.
This is a used book - there is no escaping the fact it has been read by someone else and it will show signs of wear and previous use. Overall we expect it to be in very good condition, but if you are not entirely satisfied please get in touch with us.