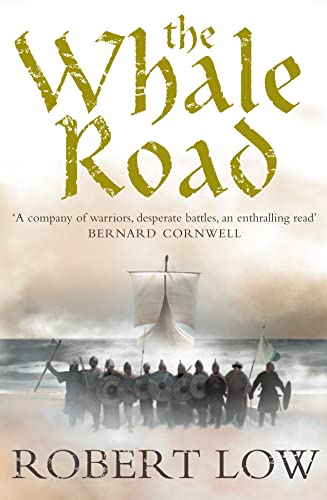 The Whale Road
by Robert Low

The first in the Oathsworn series, charting the adventures of a band of Vikings on the chase for the secret hoard of Attila the Hun.

The Whale Road (The Oathsworn Series, Book 1) by Robert Low

The first in the Oathsworn series, charting the adventures of a band of Vikings on the chase for the secret hoard of Attila the Hun.

Life is savage aboard a Viking raider. When young Orm Rurikson is plucked from the snows of Norway to join his estranged father on the Fjord Elk, he becomes an unlikely member of a notorious crew. They are the Oathsworn - so named after the spoken bond that ties them in brotherhood - and they ply a casual trade on the ocean wave, selling their swords to the highest bidder.

But times are changing. Loyalty to the old Norse Gods is fading, and the followers of the mysterious 'White Christ' are gaining power across Europe. Hired as relic-hunters by the merchant rulers of a bustling city, the Oathsworn are sent in search of a legendary sword of untold value to the new religion. With only a young girl as guide, their quest will lead them onto the deep and treacherous waters of the 'whale road', toward the cursed treasure of Attila the Hun. And to a challenge that will test the very bond that holds them together.

Robert Low, a significant up and coming voice in historical fiction, has created a startlingly modern tale in the style of the great Viking sagas. A heady mix of powerful suspense, blockbuster battles and religious intrigue, THE WHALE ROAD is a must for fans of Bernard Cornwell and Tim Severin. The Oathsworn series is sure to hook old and new readers alike.

'A fantastic book, one of the best I have read for years. There's a wonderful earthiness to proceedings and he creates a tangible sense of being there. There's a sturdy, lyrical and epic quality about the writing which makes it feel like the kind of saga a Viking would recount in his old age.'
SIMON SCARROW

`All the right ingredients are firmly in place...above all there is the storyline itself; told in an earthy, rough-and-ready stylewhich perfectly compliments this saga for the 21st Century.'
Yorkshire Evening Post

`A fascinating read' The Glasgow Herald

`The Hangman humour of the band of sworn brothers gives Low's epic but brutal tale real humanity and the detail of 10th century life is wonderfully vivd. The action is fast and furious...shockingly believably so. Low's debut novel hits the mark with maximum impact.'
Bridlington Today

Robert Low has been a journalist and writer since the age of seventeen. He covered the wars in Vietnam, Sarajevo, Romania and Kosovo until common sense and the concerns of his wife and daughter prevailed.

To satisfy his craving for action, having moved to an area rich in Viking tradition, he took up re-enactment, joining The Vikings. He now spends his summers fighting furiously in helmet and mail in shieldwalls all over Britain and winters training hard. He lives in Largs, Scotland.

GOR001182268
The Whale Road (The Oathsworn Series, Book 1) by Robert Low
Robert Low
The Oathsworn Series
Used - Very Good
Paperback
HarperCollins Publishers
2007-08-01
400
0007215304
9780007215300
N/A
Book picture is for illustrative purposes only, actual binding, cover or edition may vary.
This is a used book - there is no escaping the fact it has been read by someone else and it will show signs of wear and previous use. Overall we expect it to be in very good condition, but if you are not entirely satisfied please get in touch with us.