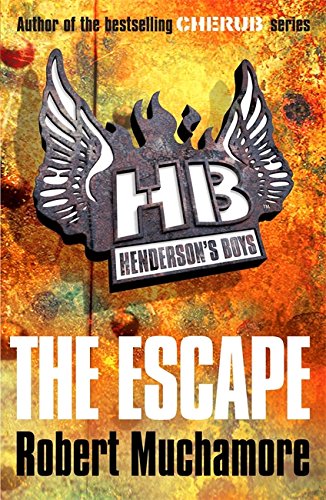 Hitler's army is advancing towards Paris, and millions of French civilians are on the run.

Amidst the chaos, two British children are being hunted by German agents.

British spy Charles Henderson tries to reach them first, but he can only do it with the help of a twelve-year-old French orphan.

The British secret service is about to discover that kids working undercover will help to win the war.

Robert Muchamore was born in Islington in 1972 and spent thirteen years working as a private investigator. He was inspired to create the CHERUB series by his nephews` complaints about the lack of anything for them to read! Learn more at www.muchamore.com.

GOR001216421
Henderson's Boys: The Escape: Book 1 by Robert Muchamore
Robert Muchamore
Henderson's Boys
Used - Very Good
Paperback
Hachette Children's Group
2009-02-05
320
0340956488
9780340956489
Short-listed for Independent Booksellers' Week Book of the Year Award: Children's Book of the Year 2010
Book picture is for illustrative purposes only, actual binding, cover or edition may vary.
This is a used book - there is no escaping the fact it has been read by someone else and it will show signs of wear and previous use. Overall we expect it to be in very good condition, but if you are not entirely satisfied please get in touch with us.