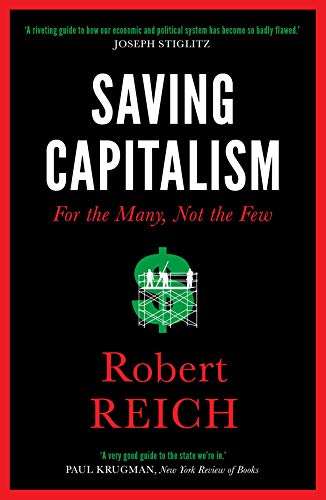 Out of Stock
£7.49
From acclaimed thinker and former US Labor Secretary Robert Reich: how capitalism can be fixed.
Very Good
Only 0 left

Saving Capitalism: For The Many, Not The Few by Robert Reich

'A very good guide to the state we're in' Paul Krugman, New York Review of Books

'A well-written, thought-provoking book by one of America's leading economic thinkers and progressive champions.' Huffington Post

Do you recall a time when the income of a single schoolteacher or baker or salesman or mechanic was enough to buy a home, have two cars, and raise a family?

Robert Reich does - in the 1950s his father sold clothes to factory workers and the family earnt enough to live comfortably. Today, this middle class is rapidly shrinking: American income inequality and wealth disparity is the greatest it's been in eighty years.

As Reich, who served in three US administrations, shows, the threat to capitalism is no longer communism or fascism but a steady undermining of the trust modern societies need for growth and stability. With an exclusive chapter for Icon's edition, Saving Capitalism is passionate yet practical, sweeping yet exactingly argued, a revelatory indictment of the economic status quo and an empowering call to action.

'A riveting guide to how our economic and political system has become so badly flawed.' -- Joseph Stiglitz
'Reich makes a very good case that widening inequality largely reflects political decisions that could have gone in very different directions... Saving Capitalism is a very good guide to the state we're in.' * Paul Krugman, The New York Review of Books *
'One of Reich's finest works, and is required reading for anyone who has hope that a capitalist system can indeed work the many, and not just the few.' * Salon *
'Arresting, thought-provoking... Readily understandable language... Powerful.' * Publishers Weekly *
'Like any good teacher, Robert Reich knows that making a simple yet crucial idea stick often takes much time and many presentations of the concept... In Saving Capitalism, Reich drives home a basic fact that, if widely understood, could lift America from today's destructive political standoff.' * Chicago Tribune *
'Reich has both the stature and eloquence to make a compelling case... Highly recommended to all readers... Insightful.' * Library Journal, starred review *

Robert Reich is Chancellor's Professor of Public Policy at the Richard and Rhoda Goldman School of Public Policy at the University of California, Berkeley, and senior fellow at the Blum Center for Developing Economies. He has served in three national administrations and has written fourteen books, including the bestsellers Supercapitalism and Locked in the Cabinet. His articles have appeared in the New Yorker, Atlantic, New York Times, Washington Post, and Wall Street Journal. He is co-creator of the award-winning 2013 film Inequality for All.

GOR008096036
Saving Capitalism: For The Many, Not The Few by Robert Reich
Robert Reich
Used - Very Good
Paperback
Icon Books Ltd
2017-02-02
304
1785781766
9781785781766
N/A
Book picture is for illustrative purposes only, actual binding, cover or edition may vary.
The book has been read, but looks new. The book cover has no visible wear, and the dust jacket is included if applicable. No missing or damaged pages, no tears, possible very minimal creasing, no underlining or highlighting of text, and no writing in the margins.