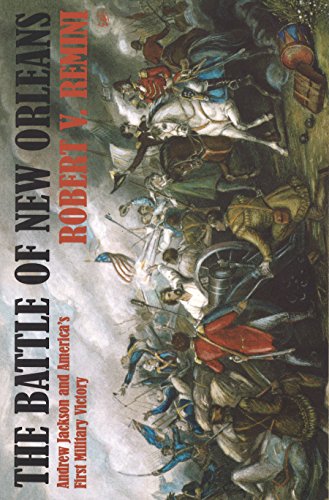 In Stock
£3.99
A happenstance coalition of militiamen, regulars, untrained frontiersmen, free blacks, pirates, Indians and townspeople - marching to 'Yankee Doodle' and 'La Marseillaise' - inhabit The Battle of New Orleans in a rich array of colourful scenes.
Very Good
Only 4 left

In 1815 Britain's crack troops, fresh from the victories against Napoleon, were stunningly defeated near New Orleans by a ragtag army of citizen-soldiers under the commander they dubbed 'Old Hickory', Andrew Jackson. It was this battle that defined the United States as a military power to be reckoned with and an independent democracy here to stay. A happenstance coalition of militiamen, regulars, untrained frontiersmen, free blacks, pirates, Indians and townspeople - marching to 'Yankee Doodle' and 'La Marseillaise' - inhabit The Battle of New Orleans in a rich array of colourful scenes. Swashbuckling Jean Lafitte and his privateers. The proud, reckless British General Pakenham and his miserable men ferried across a Louisiana lake in a Gulf storm. The agile Choctaw and Tennessee 'dirty shirt' sharpshooters who made a sport of picking off redcoat sentries by night. And Jackson himself - tall, gaunt, shrewd, by turns gentle and furious, declaring 'I will smash them, so help me God!' Robert Remini's vivid evocation of this glorious, improbable victory is more than a masterful military history. It proves that only after the Battle of new Orleans could Americans say with confidence that they were Americans, not subjects of a foreign power. It was the triumph that catapulted a once-poor, uneducated orphan boy into the White House and forged a collection of ex-colonies and dissenters into a nation.

"A masterful historical narrative...Remini's impeccable scholarship and lively pen produce what undoubtedly will become the standard account" * Publisher's Weekly *
"The Battle of New Orleans is one of the most significant turning points in American history and Robert Remini brings it all back to life in this first-rate, definitive book. Highly recommended!" -- Stephen E. Ambrose
"A gem of a book, perfectly formed and beautifully written" -- David Herbert Donald, author of Lincoln

Robert V. Remini was called by the New York Times the 'foremost Jacksonian scholar of our time'. In addition to his three volume biography of Andrew Jackson, he wrote biographies of Henry Clay and Daniel Webster, and a dozen other books on Jacksonian America. Among his many honours are the National Book Award, the Lyndon Baines Johnson Foundation Award, the Carl Sandburg Award for Non-Fiction, and the University Scholar Award of the University of Illinois. He was also Professor Emeritus of History and Research Professor Emeritus of Humanities at the University of Illinois in Chicago and then Historian of the United States House of Representatives from 2005 - 2010. He died at the age of 91 in Wilmette, Illinois in 2013.

GOR004382604
Battle Of New Orleans by Robert Remini
Robert Remini
Used - Very Good
Paperback
Vintage Publishing
2001-02-01
240
0712667121
9780712667128
N/A
Book picture is for illustrative purposes only, actual binding, cover or edition may vary.
This is a used book - there is no escaping the fact it has been read by someone else and it will show signs of wear and previous use. Overall we expect it to be in very good condition, but if you are not entirely satisfied please get in touch with us.