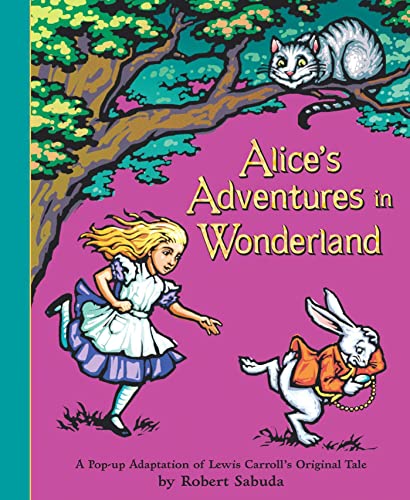 Out of Stock
£7.49
An amazing pop-up version of the bestselling classic story with groundbreaking paper engineering and Tenniel inspired illustrations.
Very Good
Only 0 left

Fall down the rabbit hole again and again with Adam Sabuda's best creation yet!

Building on his reputation as one of the most innovative paper-engineers working in children's books, Robert Sabuda dazzles us with his reworking of Alice in Wonderland. The book consists of 7 spreads with breathtaking super-size pop-ups and additional pop-ups contained within mini story books. Special effects include printed foil, acetate pull-tab scenes and on the first spread a peep show of Alice falling into Wonderland.

Praise for Alice's Adventures in Wonderland: A Pop-up Adaptation :
'breathtaking, three-dimensional images that are incredibly imaginative, intricately detailed, and perfectly executed... a fresh look at the story and offering details that add greatly to the reading experience.' School Library Journal
'This will very likely come to be seen as the definitive pop-up version of Alice, but it will also further establish Sabuda as the foremost visionary of the genre.' Booklist, Starred Review

Robert Sabuda is one of the most innovative and inventive children's book creators and is known worldwide for his amazing pop-up paper engineering. His books include Alice's Adventures in Wonderland, The Wonderful Wizard of Oz, The Twelve Days of Christmas, The Night Before Christmas, The Winter's Tale, Peter Pan, Beauty and the Beast, to name but afew, have garnered numerous awards and have made the New York Times bestseller lists on many occasions. He lives in New York City.

GOR001246849
Alice's Adventures in Wonderland by Robert Sabuda
Robert Sabuda
Used - Very Good
Hardback
Simon & Schuster
2003-11-03
12
0689837593
9780689837593
N/A
Book picture is for illustrative purposes only, actual binding, cover or edition may vary.
This is a used book - there is no escaping the fact it has been read by someone else and it will show signs of wear and previous use. Overall we expect it to be in very good condition, but if you are not entirely satisfied please get in touch with us.