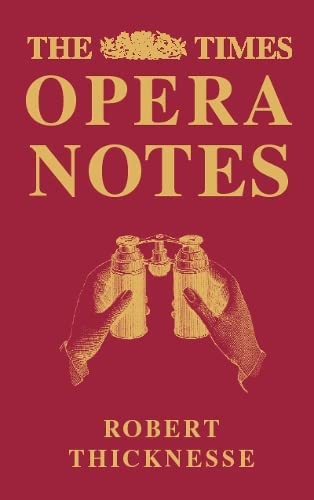 The Times Opera Notes is an accessible yet scholarly guide to over 90 mainstays of the British operatic repertoire, based on Robert Thicknesse's popular column in The Times.

The Times Opera Notes is an accessible yet scholarly guide to over 90 mainstays of the British operatic repertoire, based on Robert Thicknesse's popular column in The Times.

The Times Opera Notes has full coverage of major works by, among more than 30 others, Verdi, Wagner, Mozart, Puccini, Tchaikovsky, Handel and Strauss. Each opera has a description of the plot , principal characters and premiere details, along with a recommended recording.

Light relief within each entry is provided under the headings Not Many People Know That (Did you know that Puccini was arrested as a spy by the British authorities in Malta?) and Crush Bar Gambit (The Pearl Fishers as `an elaborate pathico-troilist fantasy, with an eternal triangle at its centre which is distinctly scalene' anyone?), plus a smattering of topical cartoons.

Packed with essential information, The Times Opera Notes is undoubtedly an entertaining introduction to this most misunderstood of art forms.

GOR001113322
The Times Opera Notes by Robert Thicknesse
Robert Thicknesse
Used - Very Good
Hardback
HarperCollins Publishers
2001-09-01
192
000712192X
9780007121922
N/A
Book picture is for illustrative purposes only, actual binding, cover or edition may vary.
This is a used book - there is no escaping the fact it has been read by someone else and it will show signs of wear and previous use. Overall we expect it to be in very good condition, but if you are not entirely satisfied please get in touch with us.