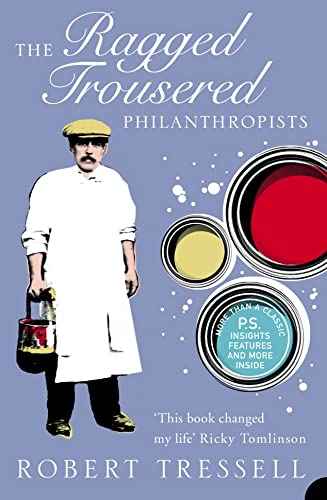 Originally published in 1914, The Ragged Trousered Philanthropists is a timeless story of socialism, political awakenings and class struggle, told with a volatile mix of heartfelt rage and sly humour.

Originally published in 1914, The Ragged Trousered Philanthropists is a timeless story of socialism, political awakenings and class struggle, told with a volatile mix of heartfelt rage and sly humour.

The Ragged Trousered Philanthropists tells the story of a group of working men who are joined one day by Owen, a journeyman-prophet with a vision of a just society. Owen's spirited attacks on the greed and dishonesty of the capitalist system rouse his fellow men from their political quietism. A masterpiece of wit and political passion, this is one of the most authentic novels of English working class life ever written.

This enduring favourite is now reinvigorated by a smart new jacket and exclusive extra material as part of Harper Perennial's Modern Classics line of reissues. Now its timeless message of justice, equality and reason will be introduced to a whole new generation of discerning readers.

`Some books seem to batter their way to immortality against all the odds, by sheer brute artistic strength, and high up in this curious and honourable company must be counted The Ragged Trousered Philanthropists. Robert Tressell's unfailing humour mixes with an unfailing rage and the two together make a truly Swiftian impact.' Evening Standard

Robert Tressell has complete familiarity with the idiom of his characters. His language is bizarre, vital, highly inventive and precisely heard - it is a complete and living archaeology of the speech of a particular human group. A brilliant and very funny book.' Spectator

Robert Tressell was the pseudonym of Robert Noonan, an Irish housepainter, who came to England from South Africa at the turn of the century. After working as a signwriter and becoming involved in local politics in Adelaide, Tressell wrote The Ragged Trousered Philanthropists, his only novel. After the manuscript was rejected by several publishers, Tressell decided to move to Canada, yet died of TB en route in 1911. The book was published three years later.

GOR001158403
The Ragged Trousered Philanthropists (Harper Perennial Modern Classics) by Robert Tressell
Robert Tressell
Harper Perennial Modern Classics
Used - Very Good
Paperback
HarperCollins Publishers
2005-02-07
640
0007204507
9780007204502
N/A
Book picture is for illustrative purposes only, actual binding, cover or edition may vary.
This is a used book - there is no escaping the fact it has been read by someone else and it will show signs of wear and previous use. Overall we expect it to be in very good condition, but if you are not entirely satisfied please get in touch with us.