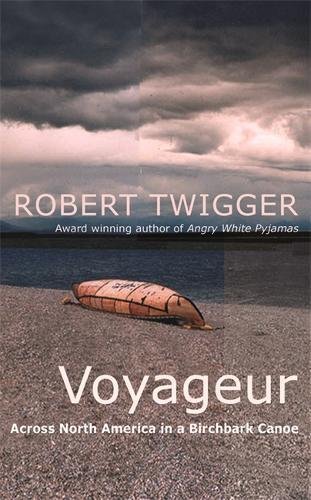 In Stock
£8.49
Best-selling author of Angry White Pyjamas travels across the Rocky Mountains by canoe
Very Good Good
Only 2 left

Voyageur: Across the Rocky Mountains in a Birchbark Canoe by Robert Twigger

Fifteen years before Lewis and Clarke Scotsman Alexander Mackenzie, looking to open up a trade route, set out from Lake Athabasca in central Northern Canada in search of the Pacific Ocean. Mackenzie travelled by bark canoe and had a cache of rum and a crew of Canadian voyageurs, hard-living backwoodsmen, for company. Two centuries later, in a spirit of organic authenticity, Robert Twigger follows in Mackenzie's wake. He too travels the traditional way, having painstakingly built a canoe from birchbark sewn together with pine roots, and assembled a crew made up of fellow travelers, ex-tree-planters and a former sailor from the US Navy. After the ice has melted, Twigger and his crew of wandering spirits finally nose out into the Athabasca River . . . Three Years . . . two thousand miles . . .over one thousand painfully towing the canoe against the current . . . several had tried before them but they were the first people to successfully complete Mackenzie's diabolical route over the Rockies in a birchbark canoe since 1793. Subsisting on a diet of porridge, elk and jackfish, supplemented with whisky and a bag of grass for the treeplanters, and with an Indian medicine charm bestowed by the Cree People of Fox Lake, the voyageurs embark on an epic road trip by canoe . . . a journey to the remotest parts of the wilderness, through Native American reservations, over mountains, through rapids and across lakes, meeting descendants of Mackenzie and unhinged Canadian trappers, running out of food, getting lost and miraculously found again, disfigured for life (the ex-sailor loses his thumb), bears brown and black, docile and grizzly. Voyageur is a moving tale of contrasts from the bleak industrial backwaters of Canada to the desolate wonder of the Rocky Mountains.

Mesmerising from the first page to last and deeply, unexpectedly moving * Daily Telegraph *
this book is mesmerising, from first page to last and deeply, unexpectedly moving -- Duncan Fallowell * THE DAILY TELEGRAPH *
Twigger is a fine raconteur, and constantly effaces himself with self-deprecating touches.? -- Joanna Kavenna * THE SPECTATOR *
'It's a genuinely delightful piece of work and i thoroughly recommend it.' -- Marcus Berkman * SUNDAY TELEGRAPH *
replete with fascinating details * SCOTLAND ON SUNDAY *
'Twigger reminds us that the adventurous spirit of the British explorer is alive and well, and VOYAGEUR is a fine addition to the genre.' -- Daniel Topolski * THE GUARDIAN *
Voyageur is a compelling read that vividly brings to life an often over-looked historical achievement. -- Tom Chesshyre * TLS (19.5.06) *

Robert Twigger won the Newdigate prize for poetry in 1985. He is the author of Angry White Pyjamas, winner of the Somerset Maugham Award and the William Hill Sports Book of the Year Award, Big Snake, The Extinction Club and Being a Man.

GOR001213617
Voyageur: Across the Rocky Mountains in a Birchbark Canoe by Robert Twigger
Robert Twigger
Used - Very Good
Hardback
Orion Publishing Co
2006-02-09
288
0297829815
9780297829812
N/A
Book picture is for illustrative purposes only, actual binding, cover or edition may vary.
This is a used book - there is no escaping the fact it has been read by someone else and it will show signs of wear and previous use. Overall we expect it to be in very good condition, but if you are not entirely satisfied please get in touch with us.