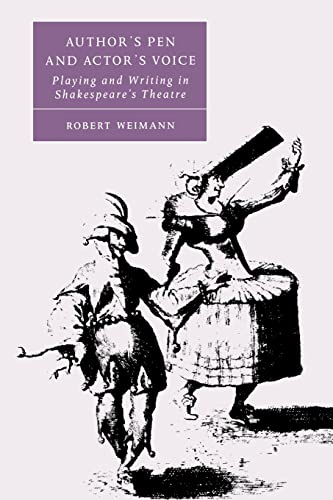 Out of Stock
£5.49
Robert Weimann redefines the relationship between writing and performance, or 'playing', in Shakespeare's theatre and offers a reconsideration and redefinition of Elizabethan performance and production practices. The study reviews the most recent methodologies of textual scholarship, performance theory, and film interpretation, and offers a new approach to understanding Shakespeare.
Very Good
Only 0 left

In this seminal work, Robert Weimann redefines the relationship between writing and performance, or 'playing', in Shakespeare's theatre. Through close reading and careful analysis Weimann offers a reconsideration and redefinition of Elizabethan performance and production practices. The study reviews the most recent methodologies of textual scholarship, the new history of the Elizabethan theatre, performance theory, and film and video interpretation, and offers a new approach to understanding Shakespeare. Weimann examines a range of plays including Hamlet, Troilus and Cressida, Henry V, A Midsummer Night's Dream and Macbeth, among others, as well as other contemporary works. A major part of the study explores the duality between playing and writing: the imaginary world-in-the-play and the visible, audible playing-in-the-world of the playhouse, and Weimann focuses especially on the gap between these two, between the so-called 'pen' and 'voice'.

'Robert Weimann's study is indispensable for an understanding of the complex play of authority and appropriation in the Elizabethan theatre. Any serious consideration of the relation between text and performance, any analysis of the struggle for the control of theatrical interpretation, any sustained reflection on the crossing of the threshold from reality to the play-world and back again would do well to begin here with this brilliant book.' Stephen Greenblatt
'In this book Weimann again charts new ground, by reading Shakespeare's searching interrogation of the two modes of production in which he worked: writing and acting. He challenges us to reimagine Shakespearean drama as an art that is inclusive as well as contestatory.' W. B. Worthen
'Robert Weimann has written an extraordinary book - bold and original in its conception, sophisticated and surprising in its execution. It is scrupulous in its research and rigorous in its argument, energetic in its prose and agile in its readings. Weimann leads us once again to rethink much of what we thought we knew about Elizabethan plays.' David Scott Kastan
'... impressively detailed... The breadth of Robert Weiman's research and the depth of his thought are evident on every page.' New Theatre Quarterly
"Utterly engaging and important..." Renaissance Quarterly
"Weimann provides a learned and complex historicized explanation of Elizabethan stage practices...Weimann's historical argument is bolstered by rich and suggestive readings..." Studies in English Literature
"...his contributions are deft, insightful, and exhilarating." National Communication Association
"The subtlety of the argument is exemplary and the subject fascinating." New Theatre Quarterly

GOR008644126
Author's Pen and Actor's Voice: Playing and Writing in Shakespeare's Theatre by Robert Weimann
Robert Weimann
Cambridge Studies in Renaissance Literature and Culture
Used - Very Good
Paperback
Cambridge University Press
2000-07-27
316
0521787351
9780521787352
N/A
Book picture is for illustrative purposes only, actual binding, cover or edition may vary.
This is a used book - there is no escaping the fact it has been read by someone else and it will show signs of wear and previous use. Overall we expect it to be in very good condition, but if you are not entirely satisfied please get in touch with us.