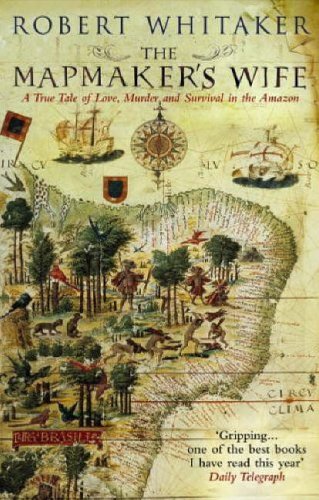 The Mapmaker's Wife
by Robert Whitaker

In Stock
£4.49
In 1735 a team of French scientists set out on a daring expedition into the South American wilderness to resolve one of the great scientific challenges of the time: the precise size and shape of the Earth.
Very Good
6 in stock

The Mapmaker's Wife: A True Tale Of Love, Murder And Survival In The Amazon by Robert Whitaker

In 1735 a team of French scientists set out on a daring expedition into the South American wilderness to resolve one of the great scientific challenges of the time: the precise size and shape of the Earth. Scaling the Andes and journeying along the Amazon, the mapmakers faced all manner of danger, while madness, disease and violent death each took their toll. However one, Jean Godin, fell in love with a local girl called Isabel Grameson. When the time came for the expedition to return to France, Godin travelled ahead to ensure the way was safe for his new family. But on reaching French Guiana, disaster struck: Spain and Portugal closed their borders and he was stranded, unable to return to Isabel. What followed lies at the core of this extraordinary tale - a heartbreaking 20-year separation that ended when Isabel, believing she might never see her husband again, decided to make her own way across the continent: a journey that began in hope but became hell on earth... Drawing on his own experience retracing Isabel's epic trek as well as contemporary records, Robert Whitaker recounts a captivating true story of love and survival set against the backdrop of what many still regard as 'the greatest expedition the world has ever known'.

"'Gripping...one of the best books I have read this year'" * DAILY TELEGRAPH *
"'An unlikely page-turner...as a testament to frustration, endurance and mutual devotion, this takes some beating'" * SUNDAY TIMES *
"'Enthralling...Full of mystery and danger, bravery and tragedy, with a rapturous love story at its core that transcends both time and continents. A marvellous read'" * DENNIS LEHANE *
"'In the brilliant tradition of Dava Sobel's Longitude...combines powerful storytelling with excellent historical research in a book that reads like a novel'" * ALAN LIGHTMAN, author of 'Einstein's Dreams' *
"'An exemplary narrative history and a fascinating tale of science, love and survival'" * MARK HONIGSBAUM, author of 'The Fever Trail' *

Robert Whitaker is a science journalist and the author, most recently, of the much-acclaimed Mad in America. He has won the George Polk Award for Medical Writing and a National Association of Science Writers' Award for best magazine article. He was a finalist for the 1998 Pulitzer Prize for Public Service, considered US journalism's top prize. Robert Whitaker's long fascination with South America began in the late 1970s, when he built and lived in a bamboo hut on the Ecuadorian coast. He now lives and writes in Cambridge, Massachusetts.

GOR001035161
The Mapmaker's Wife: A True Tale Of Love, Murder And Survival In The Amazon by Robert Whitaker
Robert Whitaker
Used - Very Good
Paperback
Transworld Publishers Ltd
2005-05-02
448
0553815393
9780553815399
N/A
Book picture is for illustrative purposes only, actual binding, cover or edition may vary.
This is a used book - there is no escaping the fact it has been read by someone else and it will show signs of wear and previous use. Overall we expect it to be in very good condition, but if you are not entirely satisfied please get in touch with us.