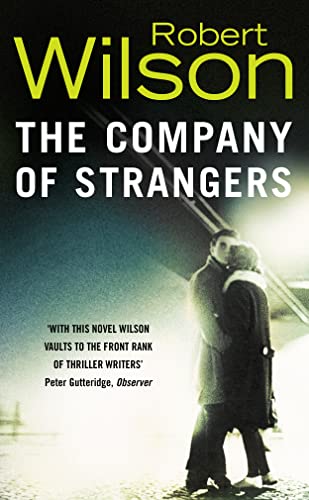 The Company of Strangers
by Robert Wilson

Stunning European-based thriller from an acclaimed young British author: `A class act' - Sunday Times; `First in a field of one' - Literary Review

The Company of Strangers Summary

The Company of Strangers by Robert Wilson

Stunning European-based thriller from an acclaimed young British author: `A class act' - Sunday Times; `First in a field of one' - Literary Review

Lisbon 1944. In the torrid summer heat, as the streets of the capital seethe with spies and informers, the endgame of the Intelligence war is being silently fought.

Andrea Aspinall, mathematician and spy, enters this sophisticated world through a wealthy household in Estoril. Karl Voss, military attache to the German Legation, has arrived embittered by his implication in the murder of a Reichsminister and traumatized by Stalingrad, on a mission to rescue Germany from annihilation. In the lethal tranquility of this corrupted paradise they meet and attempt to find love in a world where no-one can be believed.

After a night of extreme violence, Andrea is left with a lifelong addiction to the clandestine world that leads her from the brutal Portuguese fascist regime to the paranoia of Cold War Germany, where she is forced to make the final and the hardest choice.

The Company of Strangers Reviews

`Displaying once again Wilson's gifts for atmospheric depiction of place, this ambitious experiment is streets ahead of most other thrillers' John Dugdale, Sunday Times

`With Company of Strangers Wilson again shows himself to be one of our finest writers and a storyteller with few equals' Jim Driver, Time Out

`Wilson employs a slightly out-of-focus prose style that eminently suits his tale of intrigue and double-dealing ... watch his star, for it is surely in the ascendent' Vincent Banville, Irish Times

`Wilson's tale is a plotter's delight: spanning several decades and cleverly reworking past narratives in the light of new evidence, he creates an intriguing moral maze for his heroine to negotiate - and a puzzle of metaphors to match (he's a better stylist than du Maurier). Recommended' Chris Petit, Guardian

`A big, meaty novel of love and deceit ... with this novel Wilson vaults to the front-rank of thriller writers' Peter Guttridge, Observer

Robert Wilson has spent several years in West Africa, and he drew on this experience for his Bruce Medway novels. He and his wife now live in Portugal, where The Company of Strangers is partly set.

GOR001162378
The Company of Strangers by Robert Wilson
Robert Wilson
Used - Very Good
Paperback
HarperCollins Publishers
2002-01-23
400
0006512038
9780006512035
N/A
Book picture is for illustrative purposes only, actual binding, cover or edition may vary.
This is a used book - there is no escaping the fact it has been read by someone else and it will show signs of wear and previous use. Overall we expect it to be in very good condition, but if you are not entirely satisfied please get in touch with us.