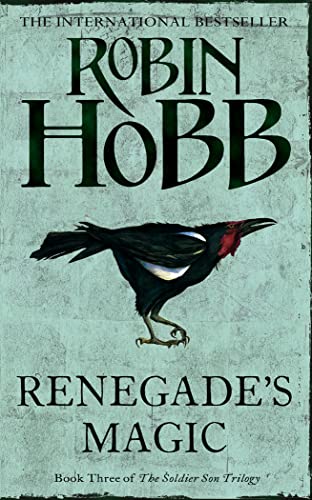 The final book in the Soldier Son from the author of the Tawny Man and Farseer trilogies, following on from the bestselling Shaman's Crossing and Forest Mage.

The final book in the Soldier Son from the author of the Tawny Man and Farseer trilogies, following on from the bestselling Shaman's Crossing and Forest Mage.

The people of Gettys remember the death of their cemetery soldier vividly. They remember believing him guilty of unspeakable crimes, condemning him, and then watching as other men of his unit beat him until he no longer drew breath.

But Nevare Burvelle didn't die that day, though everyone believes they saw it happen. He was cornered by a power far more intractable than an angry mob.

When he was a boy, the magic of the Specks - the dapple-skinned tribes of the frontier forests - claimed Nevare as a saviour; severing his soul in two, naming his stolen half Soldier's Boy and shaping him into a weapon to halt the Gernian expansion into their lands and save their beloved ancestor trees.

Until now Nevare has defied the magic, unable to accept his traitorous fate. But the magic has won: it has extinguished his once golden future, devastated his family and has now turned his own people against him. Faced with endangering the only loved-ones he has left, Nevare has no choice but to surrender to its will and enter the forest.

But surrendering to his Speck destiny is only the beginning of his trials. Before he submits completely, Nevare makes one desperate last attempt to deter the Gernians from the Barrier Mountains without causing them harm. But the magic accepts no compromise. Exhausted, Nevare can no longer suppress his traitorous Speck self, Soldiers Boy. Losing control, he becomes a prisoner in his own body; able only to watch helplessly as his other half takes

Soldier's Boy is determined to stop the Gernian expansion at all cost, and unlike Nevare, he has no love, nor sympathy for his spirit-twin's world.

'Hobb is one of the great modern fantasy writers... what makes her novels as addictive as morphine is not just their imaginative brilliance but the way her characters are compromised and manipulated by politics'
The Times

GOR001257127
Renegade's Magic (The Soldier Son Trilogy, Book 3) by Robin Hobb
Robin Hobb
The Soldier Son Trilogy
Used - Very Good
Paperback
HarperCollins Publishers
2008-07-01
768
0007196202
9780007196203
N/A
Book picture is for illustrative purposes only, actual binding, cover or edition may vary.
This is a used book - there is no escaping the fact it has been read by someone else and it will show signs of wear and previous use. Overall we expect it to be in very good condition, but if you are not entirely satisfied please get in touch with us.