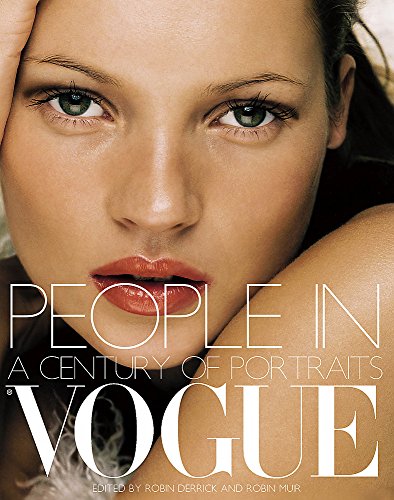 People In Vogue by Robin Muir

Drawn from the archives of Vogue and spanning nearly a century, PEOPLE IN VOGUE is a stunning collection of photographs of the famous and infamous seen through the unrivalled and discriminating eye of the world's most definitive fashion magazine

People In Vogue: A Century of Portrait Photography by Robin Muir

The archives of British Vogue define modern portraiture. Its collection remains the essential barometer of the social and cultural changes of the last century. So, portrayed here are the great, the good, and, frequently, the infamous too. PEOPLE IN VOGUE provides an insight into those who, through talent, beauty, personality or an alchemical combination of all three, set a stamp on their age. From life-enhancers to the great catalysts of change. Princesses and pop stars. Models, writers and actors. Architects and designers. Society beauties and style dictators. Scientists and world leaders. They all appear here, fixed in their time by the 20th-century's leading photographers: Hoppe, Baron de Meyer, Horst, Beaton, Steichen, Snowdon, Parkinson, Bailey, Newton, Weber, Knight, Teller, Testino and others. A commentary accompanies each picture, describing the subject and their allure (or notoriety) in terms of their era, circumstance and lifestyle, frequently with the reactions of Vogue's critics and commentators. PEOPLE IN VOGUE is a unique modern archive of a century and beyond -- as stunningly produced as the people within its pages.
Some extraordinary images are included in this collection. If you're a Vogue-ette, a photography nut, or a celebrity obsessive, this book is the book for your coffee table * HEAT *
They don't come more glamorous than PEOPLE IN VOGUE * YOU MAGAZINE *
A unique record of those whose talent has sealed them in our memories for decades; a stunning group of portraits by top photographers, made all the more fascinating by the benefit of hindsight. See for yourself * VOGUE *
From Virginia Woolf to Uma Thurman, rock stars, actors and cultural icons are brought together in this collection of stunning photos that look as fresh as the day they were taken * GRAZIA *
Robin Derrick has worked as art director for The Face, Italian Elle, Glamour France and Arena magazines. He now juggles his time between his role as creative director at Vogue and his photography commissions. Robin Muir is a writer, curator and former picture editor of Vogue.
GOR001490454
9780316731140
0316731145
People In Vogue: A Century of Portrait Photography by Robin Muir
Robin Muir
Used - Very Good
Paperback
Little, Brown & Company
2005-02-05
352
N/A
Book picture is for illustrative purposes only, actual binding, cover or edition may vary.
This is a used book - there is no escaping the fact it has been read by someone else and it will show signs of wear and previous use. Overall we expect it to be in very good condition, but if you are not entirely satisfied please get in touch with us
Trustpilot