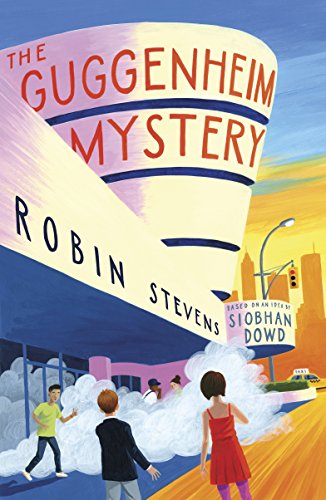 The Guggenheim Mystery
by Robin Stevens

The Guggenheim Mystery by Robin Stevens

Three months ago, I solved the mystery of how my cousin Salim disappeared from a pod on the London Eye.

This is the story of my second mystery.

This summer, I went on holiday to New York, to visit Aunt Gloria and Salim. While I was there, a painting was stolen from the Guggenheim Museum, where Aunt Gloria works.

Everyone was very worried and upset. I did not see what the problem was. I do not see the point of paintings, even if they are worth GBP9.8 million. Perhaps that's because of my very unusual brain, which works on a different operating system to everyone else's.

But then Aunt Gloria was blamed for the theft - and Aunt Gloria is family. And I realised just how important it was to find the painting, and discover who really had taken it.

Both a tremendous art-theft whodunit and a loving tribute to the much-missed author Siobhan Dowd . . . Stevens' deft, philosophical writing lends itself perfectly to a continuation of Dowd's work * Guardian *
Gloriously inventive but still loyal to the world that Dowd created . . . What is most affecting is her ability to narrate the story through the eyes of a child with Asperger's - his every move is brilliant observed * Telegraph *
Engaging and convincing * Sunday Times Children's Book of the Week *
A very perplexing mystery * Sun *

Robin was born in California and grew up in an Oxford college, across the road from the house where Alice in Wonderland lived. She has been making up stories all her life. When she was twelve, her father handed her a copy of The Murder of Roger Ackroyd and she realised that she wanted to be either Hercule Poirot or Agatha Christie when she grew up. She spent her teenage years at Cheltenham Ladies' College, reading a lot of murder mysteries and hoping that she'd get the chance to do some detecting herself (she didn't). She went to university, where she studied crime fiction, and then she worked at a children's publisher. Robin is now a full-time author, and her books are both award-winning and bestselling. She lives in Oxford. Siobhan Dowd lived in Oxford with her husband, Geoff, before tragically dying from cancer in August 2007, aged 47. She was both an extraordinary writer and an extraordinary person. Siobhan's first novel, A Swift Pure Cry, won the Branford Boase Award and the Eilis Dillon Award and was shortlisted for the Carnegie Medal and Booktrust Teenage Prize. Her second novel, The London Eye Mystery, won the 2007 NASEN & TES Special Educational Needs Children's Book Award. In March 2008, the book was shortlisted for the prestigious Children's Books Ireland Bisto Awards. Siobhan's third novel, Bog Child, was the first book to be posthumously awarded the Carnegie Medal in 2008. The award-winning novel A Monster Calls by Patrick Ness was based on an idea of Siobhan's. Her novella, The Ransom of Dond, was published in 2013, illustrated throughout by Pam Smy.

GOR008403814
The Guggenheim Mystery by Robin Stevens
Robin Stevens
Used - Very Good
Hardback
Penguin Random House Children's UK
2017-08-03
320
014137702X
9780141377025
N/A
Book picture is for illustrative purposes only, actual binding, cover or edition may vary.
This is a used book - there is no escaping the fact it has been read by someone else and it will show signs of wear and previous use. Overall we expect it to be in very good condition, but if you are not entirely satisfied please get in touch with us.