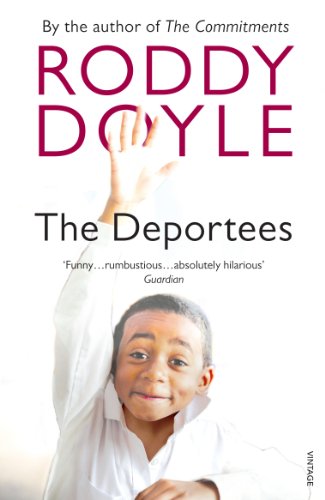 The Deportees
by Roddy Doyle

In Stock
£2.39
For the past few years Roddy Doyle has been writing stories for Metro Eireann, a newspaper started by, and aimed at, immigrants to Ireland.
Very Good
8 in stock

The Deportees by Roddy Doyle

For the past few years Roddy Doyle has been writing stories for Metro Eireann, a newspaper started by, and aimed at, immigrants to Ireland. Each of the stories took a new slant on the immigrant experience, something of increasing relevance and importance in today's Ireland. The stories range from 'Guess Who's Coming to the Dinner', where a father who prides himself on his open-mindedness when his daughters talk about sex, is forced to confront his feelings when one of them brings home a black fella, to a terrifying ghost story, 'The Pram', in which a Polish nanny grows impatient with her charge's older sisters and decides - in a phrase she has learnt - to 'scare them shitless'.

"Writing at the top of his form...Doyle proves a brilliant, offbeat Dublin diplomat. He imagines, with humour and humanity, the difficulties involved in being Irish and in being foreign and unassimilated in Ireland. He has the sharpest eye, the wildest sense of humour and the most benevolent heart" * Observer *
"Constantly inventive, extremely funny and illustrate his ability to get under the skin of ordinary people" * Daily Mail *
"It's as if Roddy Doyle went out on the streets for you with his own microphone and camcorder... You're there, whether you want to be or not" -- Maeve Binchy * The Times *
"The evident sincerity and unrepentant good cheer of these stories will carry the reader a long way with them" * Independent on Sunday *
"Much to admire and enjoy" * Sunday Times *

Roddy Doyle was born in Dublin in 1958. He is the author of nine acclaimed novels, one collection of short stories and Rory & Ita, a memoir about his parents. He won the Booker Prize in 1993 for Paddy Clarke Ha Ha Ha. His last book, The Dead Republic, was the final volume in the Henry Smart trilogy.

GOR001156018
The Deportees by Roddy Doyle
Roddy Doyle
Used - Very Good
Paperback
Vintage Publishing
2008-08-07
256
0099507056
9780099507055
N/A
Book picture is for illustrative purposes only, actual binding, cover or edition may vary.
This is a used book - there is no escaping the fact it has been read by someone else and it will show signs of wear and previous use. Overall we expect it to be in very good condition, but if you are not entirely satisfied please get in touch with us.