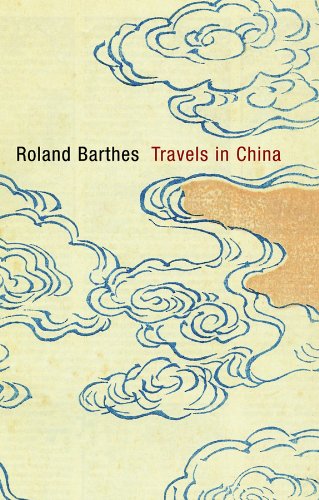 Travels in China
by Roland Barthes

In Stock
£8.99
In 1974 Roland Barthes travelled in China as part of a small delegation of distinguished French philosophers and literary figures. They arrived in China just as the last stage of the Cultural Revolution was getting underway - the campaign to criticize Lin Biao and Confucius.
Very Good
Only 1 left

Travels in China by Roland Barthes

In 1974 Roland Barthes travelled in China as part of a small delegation of distinguished French philosophers and literary figures. They arrived in China just as the last stage of the Cultural Revolution was getting underway - the campaign to criticize Lin Biao and Confucius. While they were welcomed by writers and academics, the travelers were required to follow a pre-established itinerary, visiting factories and construction sites, frequenting shows and restaurants that were the mainstay of Western visitors to China in the 70s.

Barthes planned to return from the trip with a book on China: the book never materialized, but he kept the diary notes he wrote at the time. The notes on things seen, smelled and heard alternate with reflections and remarks - meditations, critiques or notes of sympathy, an aside from the surrounding world. Published now for the first time more than thirty years after the trip, these notebooks offer a unique portrait of China at a time of turbulence and change, seen through the eyes of the world's greatest semiotician.

"The book's most charming aspect is his little sketches: of hairstyles, or statues, or seating plans, and one tiny caricature of a near-featureless but somehow reassuring Confucius, an apparition perhaps of one whom Barthes wished to meet but didn't." The Guardian "The three notebooks that make up 'Travels in China' record impressions of what Barthes sees, hears, eats, and thinks in the present tense, so that we feel as if we re perched on his shoulder, watching the events unfold in real time." Los Angeles Review of Books "These writings present an encounter between one of modern France's most influential intellectuals and a China undergoing profound change and adjustement." Times Higher Education "An entertainingly frank personal travelogue." The Newark Star-Ledger "Travels in China presents the drama of the leftist semiotician in a world in which there doesn't seem to be anything left to interpret In general, this collection calls to mind those may Utopias verging on dystopias in which, all social problems having been solved, society lapses into a stultifying bordeom - except that this wasn't a fantasy of the future but rather an encounter with what existed in the here and now." New Statesman "A China that was in the throes of its cultural revolution was perhaps the perfect location for the unsentimental, observant and wry writer, who loved nothing more than to burst the vain balloons of human life. It is all here, from the greasy rice spoiling his new trousers on the way out, to the official and officious goodbye at Beijing." Good Book Guide "Reveals a figure who saw failure before his contemporaries and found Tel Quel's Maoist phase to be far from a great leap forward." Times Literary Supplement "Barthes's notebooks show three things that differentiate him from many useful idiots, as Lenin once put it, of the time: he was honest about what he saw in China, he was bored most of the time, and he was gay." Literary Review "This is an image of pre-capitalist China, a snapshot of a nation that has changed utterly in the past 35 years." Sydney Morning Herald "Barthes writes with his customary insight and style." Conde Nast Traveller "These notebooks, object of much controversy when published in France, record Barthes' ateempts to take an interest in Mao's China and his disaffection from the eager political discussions of his French companions. Though Barthes would doubtless have opposed the publicatino of this combination of dutiful note-taking and intimate notations, these fragments give an unfiltered picture of his affective reactions, touristic boredom, and sexual frustration." Jonathan Culler, Cornell University "What's delicate and even discreetly political about these engaging notes on a brief trip to China is the liveliness of Barthes's resistance to the obvious and his continuing quest for the oblique and curious. He was too subtle a thinker simply to endorse the unpredictable; but he knew when to worry about predictability, even in a good cause." Michael Wood, Princeton University

Roland Barthes (1915-1980) was a French essayist and social and literary critic.

GOR005578133
Travels in China by Roland Barthes
Roland Barthes
Used - Very Good
Hardback
Polity Press
2011-12-13
240
0745650805
9780745650807
N/A
Book picture is for illustrative purposes only, actual binding, cover or edition may vary.
This is a used book - there is no escaping the fact it has been read by someone else and it will show signs of wear and previous use. Overall we expect it to be in very good condition, but if you are not entirely satisfied please get in touch with us.