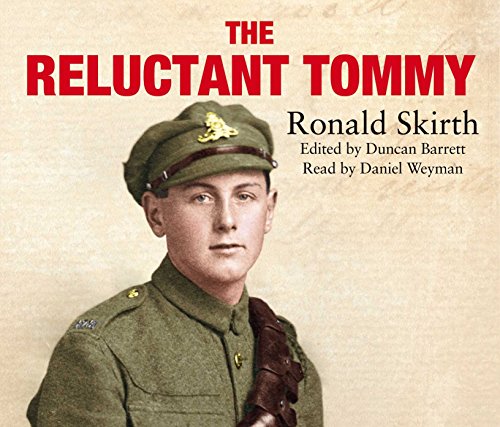 The Reluctant Tommy
by Ronald Skirth

In Stock
£4.99
A moving and surprising memoir of an ordinary soldier in the First World War
Very Good
Only 1 left

The Reluctant Tommy: An Extraordinary Memoir of the First World War by Ronald Skirth

'Ella darling, There are things I have concealed from you up till now that I think you ought to know; things that have turned me from a different person from the Ronald you know.'

So, in April 1918, Ronald Skirth, a non-commissioned officer in the Royal Artillery, wrote to his sweetheart, back in England. A year before, Skirth, then just nineteen years old, had been sent to fight on the Western Front. This is his story, the story of a young man who went to war a devoted servant of King and country and returned utterly convinced that war, all war, was wrong and who acted upon his convictions, making a pact with God that he would not kill. This riveting memoir was written fifty years after the end of the war, drawing on his own contemporary diary entries and letters home. Never published before, it affords a vivid, moving and surprising insight into that most dreadful of conflicts.

After the First World War, Ronald Skirth returned to England and married Ella. He became a teacher and, after he had retired, wrote his memoirs of the First World War. He died in 1977 and is survived by his daughter, Jean. Duncan Barrett is an editor and writer. He lives in London.

GOR008583305
The Reluctant Tommy: An Extraordinary Memoir of the First World War by Ronald Skirth
Ronald Skirth
Used - Very Good
Hardback
Pan Macmillan
2011-05-06
0230754287
9780230754287
N/A
Book picture is for illustrative purposes only, actual binding, cover or edition may vary.
This is a used book - there is no escaping the fact it has been read by someone else and it will show signs of wear and previous use. Overall we expect it to be in very good condition, but if you are not entirely satisfied please get in touch with us.