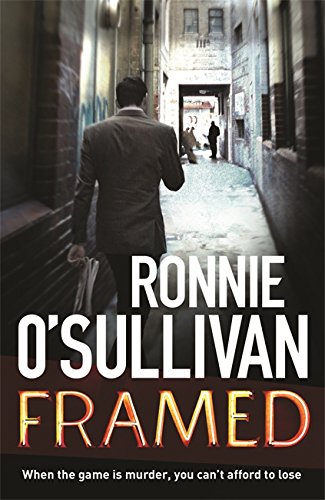 Fast paced and full of grit, this is the first crime novel from the UK's most charismatic sporting genius.

WHEN THE GAME IS MURDER, YOU CAN'T AFFORD TO LOSE.

Frankie James is a young man with a lot on his shoulders. His mother disappeared when he was sixteen; his father's in jail for armed robbery; and he owes rent on the Soho snooker club he inherited to one of London's toughest gangsters.

And things are about to get a whole lot worse when Frankie's brother Jack is accused of killing a bride-to-be. He needs to find out who framed Jack and why; but that means entering the sordid world of bent coppers, ruthless mobsters and twisted killers.

But in the dog-eat-dog underworld of 1990s Soho, is he tough enough, and smart enough to come out on top?

If you like Martina Cole and Kimberley Chambers, you'll LOVE this.

At snooker, O'Sullivan is easily the best in the world. At running, he is club class...His frank memoir, which reads like a transcript from the psychiatrist's coach, explains that running - and the running community - gave him a sense of acceptance and achievement.--THE SUNDAY TIMES on RUNNING
When he starts talking about snooker and his rivals, he is fascinating. Yet it wasn't snooker that ended up saving him from the booze and drugs - it was distance running.--DAILY TELEGRAPH on RUNNING
The running is literal as well as metaphorical...it's a heartbreaking story--METRO on RUNNING
RUNNING is a chaotic race through O'Sullivan's life, but this does little to dethrone him as the people's champion - it simply adds further to his legend.--PRESS ASSOCIATION on RUNNING
Like a lot of shy people, he can look arrogant and aloof when he is performing, while underneath there's turmoil.--DAILY MAIL on RUNNING

Since turning professional in 1992, O'Sullivan has clocked up an incredible number of awards and trophies, including five World Championships, a record-breaking seven Masters titles, seven UK Championships and 19 Triple Crown tournaments. In 2019 he won the Tour Championship, making him snooker's world number one for the fourth time. Follow him on Twitter @ronnieo147

GOR008433173
Framed by Ronnie O'Sullivan
Ronnie O'Sullivan
Used - Very Good
Paperback
Orion Publishing Co
2017-06-13
352
140915131X
9781409151319
N/A
Book picture is for illustrative purposes only, actual binding, cover or edition may vary.
This is a used book - there is no escaping the fact it has been read by someone else and it will show signs of wear and previous use. Overall we expect it to be in very good condition, but if you are not entirely satisfied please get in touch with us.