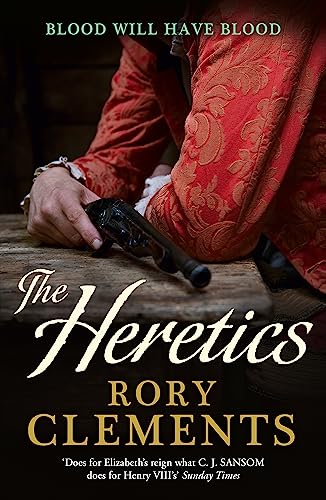 The Heretics by Rory Clements

For fans of CJ Sansom and SJ Parris, THE HERETICS is the fifth in Rory Clements' acclaimed and bestselling John Shakespeare series of Tudor spy thrillers. Clements, winner of the Ellis Peters Historical Fiction Award, 'does for Elizabeth's reign what CJ Sansom does for Henry VIII's' Sunday Times

England may have survived the Armada threat of 1588, but when Spanish galleys land troops in Cornwall on a lightning raid seven years later, is it a dry-run for a new invasion? Revenge for the sacking of Spanish shipping and ports? A warning shot to Drake and Hawkins? Or is there, perhaps, a more sinister motive?

The Queen is speechless with rage at Spain's temerity. Sir Robert Cecil demands answers. But as John Shakespeare tries to get a grip on events, England's secret defences begin to unravel as one by one his network of spies is horribly murdered. But what has all this to do with Thomasyn Jade, a girl driven to the edge of madness by the foul rituals of exorcism? And what is the link to a group of priests held prisoner in the bleak confines of Wisbech Castle?

From the pain-wracked torture rooms of the Inquisition in Seville to the marshy wastes of fenland, from the wild coasts of Cornwall to the sweat and sawdust of the Elizabethan playhouses, and from the condemned cell at Newgate to the devilish stench of brimstone and fear as demons are driven out by unspeakable means, THE HERETICS builds to a terrifying climax that threatens the life of the Queen herself.

Rory Clements again brings to life the dark side of Elizabethan England. * Daily Mail *
Rory Clements again brings to life the dark side of Elizabethan England. * Daily Mail *
Enjoyable, bloody and brutish. * Guardian *
Enjoyable, bloody and brutish. * Guardian *
Rory Clements is the award-winning author of the John Shakespeare series of Tudor spy thrillers. His six acclaimed novels, Martyr, Revenger, Prince, Traitor, The Heretics and The Queen's Man, follow Elizabeth's Intelligencer, John Shakespeare, brother to the playwright William, through the dark underworld of Tudor England as he unmasks the traitors and conspirators who plot against the Queen. Rory Clements won the Crime Writers' Association Ellis Peters Historical Fiction Award in 2010 for Revenger, and has been shortlisted for CWA Awards for Martyr, Prince and The Heretics. A TV series is currently in development. Find out more at www.roryclements.co.uk
GOR005491759
9781848544369
1848544367
The Heretics: John Shakespeare 5 by Rory Clements
Rory Clements
John Shakespeare
Used - Very Good
Paperback
Hodder & Stoughton
2014-02-13
464
Short-listed for CWA Ellis Peters Historical Award 2013 (UK)
Book picture is for illustrative purposes only, actual binding, cover or edition may vary.
This is a used book - there is no escaping the fact it has been read by someone else and it will show signs of wear and previous use. Overall we expect it to be in very good condition, but if you are not entirely satisfied please get in touch with us
Trustpilot