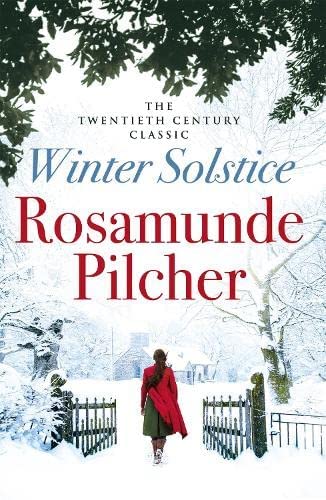 Her captivating bestseller of loss and the healing power of love now re-issued with a stunning new jacket look.

A beautiful novel by the much-loved Rosamunde Pilcher.

Elfrida Phipps loves her new life in her pretty Hampshire village. She has a tiny cottage, her faithful dog Horace and the friendship of the neighbouring Blundells - particularly Oscar - to ensure that her days include companionship as well as independence. But an unforeseen tragedy upsets Elfrida's tranquillity: Oscar's wife and daughter are killed in a terrible car crash and he finds himself homeless when his stepchildren claim their dead mother's inheritance.

Oscar and Elfrida take refuge in a rambling house in Scotland which becomes a magnet for various waifs and strays who converge upon it, including an unhappy teenage girl. It could be a recipe for disaster. But somehow the Christmas season weaves its magical spell and for Elfrida and Oscar, in the evening of their lives, the winter solstice brings love and solace.

As always, Pilcher is a sensible fairy godmother, bestowing happy endings upon the worthy and heartsick. . . [she has a] . . . remarkably evocative sense of place and watercolorist's eye for muted detail. * Kirkus Review *
enchanting . . . bound to delight her many thousands of fans. * Daily Express *
Pilcher's strength is knowing what she can do well and writing about what she knows. She has a way of tapping into the emotional life of her readers and making them care about characters not unlike themselves. * Daily Telegraph *
An entrancing tale of middle-aged love, broken hearts and teenage angst * Daily Express *
Rosamunde Pilcher's warm spell is charming and utterly convincing * Daily Mail *
Unashamed hymns to the virtues of domesticity, continuity and human warmth. And (they are) thundering good reads * Lady *
Another dose of the kind of heartwarming, gentle fiction for which she is known and loved . . . like a big mug of cocoa in front of a blazing fire on a winter night * Press & Journal, Aberdeen *
A gentle tale of everyday happenings to a set of well-drawn and believable characters * Peterborough Evening Telegraph *
A beautiful, haunting story. . . that will tug at your heartstrings * Prima *
Whether she is being poignant, wry or perceptive, Rosamunde Pilcher is always gentle * Woman's Realm *

GOR000437993
Winter Solstice by Rosamunde Pilcher
Rosamunde Pilcher
Used - Very Good
Paperback
Hodder & Stoughton General Division
2005-07-04
720
0340752483
9780340752487
N/A
Book picture is for illustrative purposes only, actual binding, cover or edition may vary.
This is a used book - there is no escaping the fact it has been read by someone else and it will show signs of wear and previous use. Overall we expect it to be in very good condition, but if you are not entirely satisfied please get in touch with us.