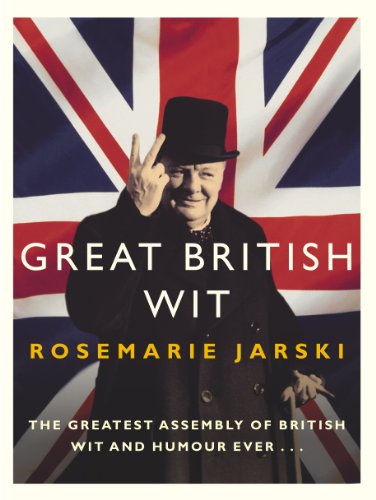 There's nothing much left to feel good about these days if you're British, but one of the few things where we all agree that we're still a world leader is our defining sense of humour. Thematically covering every subject imaginable, from God to dogs, this collection is the seminal gathering of our national wit and a picture of who we are as a nation - a monument to our monumental silliness. 'An Englishman, even if he is alone, forms an orderly queue of one.' George Mikes Jane Austen, Jo Brand, Craig Brown, Winston Churchill, Alan Clark, Jeremy Clarkson, Billy Connolly, Peter Cook, Tommy Cooper, Stephen Fry, A.A. Gill, Boris Johnson, Samuel Johnson, Maureen Lipman, Spike Milligan, Eric Morecambe, William Shakespeare, George Bernard Shaw, Frank Skinner, Sue Townsend, Peter Ustinov, Queen Victoria, Oscar Wilde, P.G. Wodehouse, Victoria Wood and many more.

"A veritable monument to our self-effacing approach" * Goodtimes *
"An outstanding up-to-date anthology" * Sunday Times *
"400 pages of the funniest one-liners ever uttered by Brits about Brits...This is one of those clever books you'll pick up intent on having a quick browse and before you know it, it's dark outside, there's a black dot on the TV and you haven't spoken to another soul for 10 hours." * Scottish Daily Record *

Rosemarie Jarski has spent half a lifetime collecting quotes and possesses an astounding breadth of knowledge when it comes to compiling quotations, as her numerous bestselling books testify. She is also a successful screenwriter and spends time working in the UK and USA.