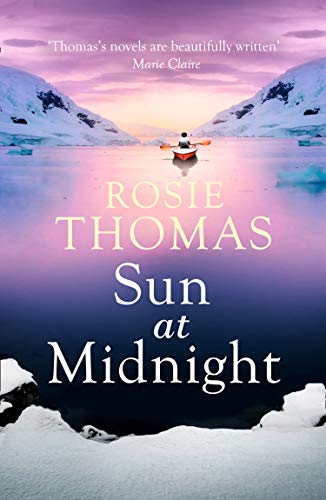 Sun at Midnight
by Rosie Thomas

An epic love story and adventure set against the stunning backdrop of Antarctica.

Sun at Midnight by Rosie Thomas

An epic love story and adventure set against the stunning backdrop of Antarctica.

Alice Peel is a geologist. She believes in observation and proof. But now she stands alone on the deck of a rickety Chilean ship as a stark landscape reveals itself. Instead of the familiar measurable world, everything that lies ahead of her is unknown and unpredictable.

Six weeks earlier her life was comfortably unfolding in an Oxford summer. Then, with her relationship suddenly in pieces, she accepted an invitation to join a group working at the end of the earth: Antarctica.

James Rooker is a man on the run. He's been running since his childhood in New Zealand. Now, there is nowhere further to go. He has taken a job working on the same small Antarctic research station.

Alice discovers an ice-blue and silver world, lit by sunlight. Nothing has prepared her for the beauty of it, or the claustrophobia of a tiny base shared with eight men and one other woman. The isolation wipes out everyone's past, and tension crackles in the air. But there is a jolt of recognition between Alice and Rooker that is like nothing she has ever known. And it is in Antartica that she discovers something else that will change her life forever ... if she survives.

`A compelling story juxtaposed with breathtaking descriptions of the landscape.' Woman and Home

'The majesty and hostility of the landscape leap off the page.' Daily Mail

`Rosie Thomas writes with beautiful, effortless prose, and shows a rare compassion and a real understanding of the nature of love.' The Times

`Honest and absorbing, Rosie Thomas mixes the bitter and the hopeful with the knowledge that the human heart is far more complicated than any rule suggests.' Mail on Sunday

`A story full of passion... will keep you reading long after bedtime.' New Woman

`Thomas's novels are beautifully written. This one is a treat.' Marie Claire

Rosie Thomas is the author of a number of celebrated novels, including the bestsellers Sun at Midnight, Iris and Ruby and Constance. Once she was established as a writer and her children were grown, she discovered a love of travelling and mountaineering. She has climbed in the Alps and the Himalayas, competed in the Peking to Paris car rally, spent time on a tiny Bulgarian research station in Antarctica and travelled the silk road through Asia. She lives in London.

GOR000532913
Sun at Midnight by Rosie Thomas
Rosie Thomas
Used - Very Good
Paperback
HarperCollins Publishers
2005-04-30
496
0007173520
9780007173525
N/A
Book picture is for illustrative purposes only, actual binding, cover or edition may vary.
This is a used book - there is no escaping the fact it has been read by someone else and it will show signs of wear and previous use. Overall we expect it to be in very good condition, but if you are not entirely satisfied please get in touch with us.