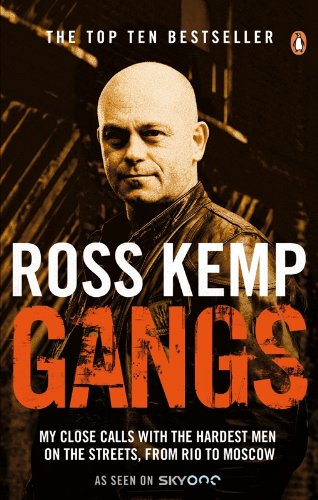 In Stock
£3.99
Ross Kemp, whose dad was a copper and taught him right from wrong, decided to infiltrate these secret underworld organizations to discover who they are, what makes them tick and what the law is doing to curb their criminal activity. This title tells his story.
Very Good
9 in stock

Ross Kemp squares up to the world's hardest streetfighters in Gangs...

Across the world millions of people are members of street gangs. In groups they fight, stab, rob, rape and murder anyone who isn't one of their own. And when rival gangs meet - what you get is warfare.

Ross Kemp, whose dad was a copper and taught him right from wrong, decided to infiltrate these secret underworld organizations to discover who they are, what makes them tick and what the law is doing to curb their criminal activity. On his harrowing journey he:

* crosses paths with warlords in Guatemala

* gets shot at in El Salvador

Only TV hardman Ross Kemp could get this close to the world's most violent street gangs: he's tough enough to earn their trust and so get them to confide their innermost secrets. It's a wild ride - and not for the faint hearted.

Ross Kemp was born in Essex in 1964, to a father who was a senior detective with the Metropolitan Police and had served in the army for four years. He is a BAFTA award-winning actor, journalist and author, who is best known for his role of Grant Mitchell in Eastenders. His award-winning documentary series Ross Kemp on Gangs led to his international recognition as an investigative journalist.

Born in Essex in 1964, Ross Kemp is best known for his potrayal of Grant Mitchell in EastEnders. The first series of Ross Kemp on Gangs was broadcast on Sky One in October 2006 and the second series in January 2007.

GOR000987403
Gangs by Ross Kemp
Ross Kemp
Used - Very Good
Paperback
Penguin Books Ltd
2008-07-29
304
0141032251
9780141032252
N/A
Book picture is for illustrative purposes only, actual binding, cover or edition may vary.
This is a used book - there is no escaping the fact it has been read by someone else and it will show signs of wear and previous use. Overall we expect it to be in very good condition, but if you are not entirely satisfied please get in touch with us.