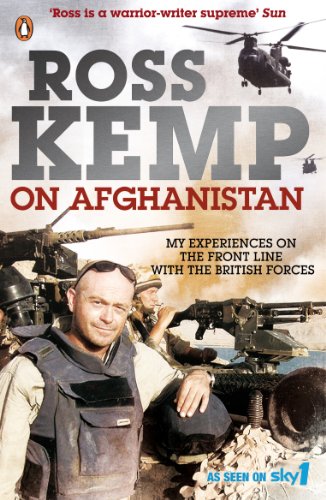 He has played an East End hardman, an SAS soldier and investigated vicious world gangs. Now Ross Kemp is taking on perhaps his hardest assignment of all - the Taliban. In order to prepare for this ordeal, Ross Kemp trains with the First Battalion Royal Anglians in England's subzero temperatures. This book tells his story.

Ross Kemp risks all to tell the story of the British soldier in Ross Kemp on Afghanistan.

He has played an East End hardman, an SAS soldier and investigated vicious world gangs. Now Ross Kemp is taking on perhaps his hardest assignment of all - the Taliban. In order to prepare for this life-threatening ordeal, Ross Kemp trains with the First Battalion Royal Anglians in England's subzero temperatures, practicing firing SA 80 rifles and .50 calibre machine guns, getting to know the soldiers and learning the tactics they use to stay alive. Sent with them to Camp Bastion in Afghanistan's Helmand province, he immerses himself fully: he endures the stifling heat, the constant threat of snipers, RPG attacks, suicide bombers and land mines. In short, he discovers first hand what it's like to fight on the frontline.

It's the closest he's ever come to dying - bullets fizzing inches from his head as they hit the ground on either side of him. After two harrowing and arduous months Ross returns to England, but there is little relief to be had as he meets the mothers of soldiers killed in the conflict. Then in September 2008 he goes back to the war zone, to see how the men he grew so close to are faring, to check how many of them are still alive. Ross Kemp on Afganistan is a fascinating, horrifying and often moving insight into the brutal reality ordinary soldiers have to face in one of the world's most dangerous and volatile regions.

Ross Kemp was born in Essex in 1964, to a father who was a senior detective with the Metropolitan Police and had served in the army for four years. He is a BAFTA award-winning actor, journalist and author, who is best known for his role of Grant Mitchell in Eastenders. His award-winning documentary series Ross Kemp on Gangs led to his international recognition as an investigative journalist.

Born in Essex in 1964, Ross Kemp is best known for his portrayal of Grant Mitchell in EastEnders. His father was a senior detective with the Metropolitan Police force, but before that he served in the army for four years. His regiment was amalgamated with others to form the Royal Anglians, the troops Ross was with in Afghanistan.
GOR001227092
9780141040882
0141040882
Ross Kemp on Afghanistan by Ross Kemp
Ross Kemp
Used - Very Good
Paperback
Penguin Books Ltd
2009-06-04
352
N/A
Book picture is for illustrative purposes only, actual binding, cover or edition may vary.
This is a used book - there is no escaping the fact it has been read by someone else and it will show signs of wear and previous use. Overall we expect it to be in very good condition, but if you are not entirely satisfied please get in touch with us
Trustpilot