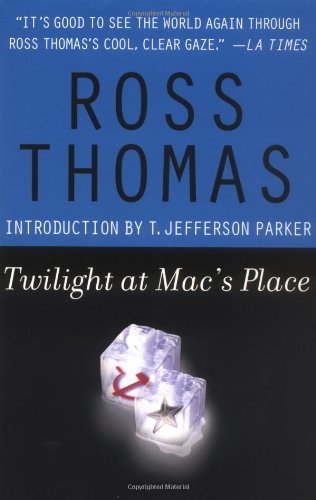 In Stock
£9.99
In the wake of former secret agent Steadfast Hayne's death, four mourners - a Frenchwoman, a former homicide cop, a foreign legionnaire, and a spook - visit the graveside and become victims in a strange series of murders.
Very Good
Only 2 left

In "Twilight at Mac's Place," the quiet death of an aged spy triggers a desperate race to control his memoirs, which threaten to reveal Cold War secrets many would prefer stayed secrets. When the spy's estranged son receives the then dizzying sum of $100,000 for all rights to the work, he is properly dizzied. He is also smart enough to seek the help of veteran Cold Warriors McCorkle and Padillo, owners of a D.C. bar called Mac's Place that is both a capital landmark and a nest of intrigue.

"Thomas is at his best here with an intricate, riveting plot and fine dry humor....A sophisticated, winning performance."
"Anyone reading a Ross Thomas thriller for the first time is in imminent danger of addiction."
"There is no one like Ross Thomas...a master of the arabesques of storytelling."

Ross Thomas is ranked as one of the very top thriller writers by his fellow authors, and his readers loudly agree. Two Edgar Awards, and other prizes, only complement the abundant praise that Thomas has received.
Thomas died in 1995, and since then all but one of his twenty-five novels had gone out of print. This should never have happened to the man of whom "The New Yorker" has said "Very few...are as consistently entertaining...even fewer can match him for style and power." Minotaur is proud to remedy this situation by reissuing Thomas's novels. So start reading, and prepare to join Ross Thomas's legions of admiring fans.

GOR001152206
Twilight at Mac's Place by Ross Thomas
Ross Thomas
Used - Very Good
Paperback
Minotaur Books,US
2003-12-19
320
0312315848
9780312315849
N/A
Book picture is for illustrative purposes only, actual binding, cover or edition may vary.
This is a used book - there is no escaping the fact it has been read by someone else and it will show signs of wear and previous use. Overall we expect it to be in very good condition, but if you are not entirely satisfied please get in touch with us.