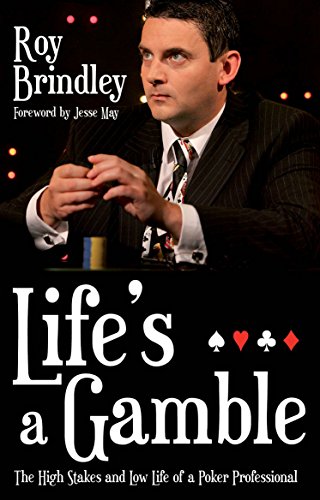 Life's a Gamble
by Roy Brindley

In Stock
£4.49
Roy Brindley has earned over a million pounds, has a contented family life, owns an incredible house and both a Porsche and a Ferrari. After a chance viewing of the Hollywood poker film Rounders, he at last put his phenomenal mathematical talent to constructive use, and his domination of the European poker circuit began.
Very Good Good
Only 1 left

Life's a Gamble: The High Stakes and Low Life of a Poker Professional by Roy Brindley

Roy Brindley has earned over a million pounds, has a contented family life, owns an incredible house and both a Porsche and a Ferrari. But he's not always had money to play with. In fact, he hasn't always had a home. Addicted to gambling like the majority of his family, Roy spent his teens and twenties in the bookies and, week in, week out, frittered away his entire pay packet as he attempted to chase his losses. By the time he was twenty-eight he was on the run from the police and living out of a cardboard box in Southsea. In 2002 he finally ended up in court and decided to turn his life around. After a chance viewing of the Hollywood poker film Rounders, he at last put his phenomenal mathematical talent to constructive use, and his domination of the European poker circuit began. From his dysfunctional early years, through a career as a greyhound trainer and journalist before playing cards for cash became his vocation, the story of Roy the Boy is both an inspirational rags-to-riches story of a man who learnt to trust something other than lady luck, and a fascinating insight into the glamorous, celebrity-filled and ever-more-popular world of poker.

"One of the best insights into the heart and mind of a gambler ever written... moving and uplifting. And for poker-lovers, a must-read" -- Des Wilson, author of Swimming with the Devilfish and Ghosts at the Table
"A blasting, naked account of what it is to be a gambler" * Jesse May *
"His story is honest and raw, but with hints of underlying, unspoken tensions. His sheer determination is contagious, and his gutsy self-belief ensures the reader stands firmly in his corner throughout... The journey Brindley takes not only from the street corner to a television career, but also as a writer, is what makes his debut book so captivating" -- Rebecca McAdam * Card Player Europe *
"A triumph... Life's a Gamble is a truly fantastic book that is both entertaining and shocking to read at the same time. Roy Brindley has captured what is going on in the mind of an addicted gambler brilliantly. It is genuinely one of the best biographies and certainly the best poker biography I've ever had the pleasure of reading" -- Barry Carter * Uk Poker News *
"He's the gambler I always wanted to be" * Nick Leeson *

Roy 'The Boy' Brindley is Europe's most successful tournament poker player. The first ever European professional to be commercially sponsored, he is currently enjoying his sixth year as the Ladbrokes official player. Roy writes for several poker publications and commentates regularly on poker tournaments for Sky Sports. He lives in Ireland with his partner and their two young children.

GOR002640320
Life's a Gamble: The High Stakes and Low Life of a Poker Professional by Roy Brindley
Roy Brindley
Used - Very Good
Paperback
Transworld Publishers Ltd
2010-02-04
320
0553819410
9780553819410
N/A
Book picture is for illustrative purposes only, actual binding, cover or edition may vary.
This is a used book - there is no escaping the fact it has been read by someone else and it will show signs of wear and previous use. Overall we expect it to be in very good condition, but if you are not entirely satisfied please get in touch with us.