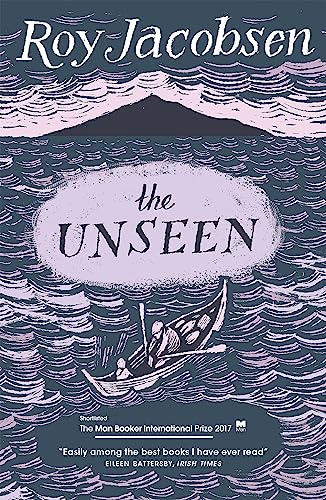 The Unseen
by Roy Jacobsen

The Unseen: SHORTLISTED FOR THE MAN BOOKER INTERNATIONAL PRIZE 2017 by Roy Jacobsen

"Easily among the best books I have ever read" Eileen Battersby, Irish Times

Nobody can leave an island. An island is a cosmos in a nutshell, where the stars slumber in the grass beneath the snow. But occasionally someone tries . . .

Ingrid Barroy is born on an island that bears her name - a holdfast for a single family, their livestock, their crops, their hopes and dreams.

Her father dreams of building a quay that will connect them to the mainland, but closer ties to the wider world come at a price. Her mother has her own dreams - more children, a smaller island, a different life - and there is one question Ingrid must never ask her.

Island life is hard, a living scratched from the dirt or trawled from the sea, so when Ingrid comes of age, she is sent to the mainland to work for one of the wealthy families on the coast.

But Norway too is waking up to a wider world, a modern world that is capricious and can be cruel. Tragedy strikes, and Ingrid must fight to protect the home she thought she had left behind.

Translated from the Norwegian by Don Bartlett and Don Shaw

Even by his high standards, his magnificent new novel The Unseen is Jacobsen's finest to date, as blunt as it is subtle and is easily among the best books I have ever read. -- Eileen Battersby * Irish Times. *
A beautifully crafted novel . . . Quite simply a brilliant piece of work . . . Rendered beautifully into English by Don Bartlett and Don Shaw, The Unseen is a towering achievement that would be a deserved Booker International winner. -- Charlie Connolly * New European. *
A profound interrogation of freedom and fate, as well as a fascinating portrait of a vanished time, written in prose as clear and washed clean as the world after a storm. -- Justine Jordan * Guardian. *
The subtle translation, with its invented dialect, conveys a timeless, provincial voice . . . The Unseen is a blunt, brilliant book. -- Tom Graham * Financial Times. *
A modern masterpiece . . . A central novel in Norwegian literature. * Klassekampen. *
This is simply a beautiful and moving read . . . A master's hand turning the small into the great. * V.G. *
Roy Jacobsen at his very best . . . A fantastic novel. * Dagbladet. *
Jacobsen's lyrical voice has been gorgeously translated into English by Don Bartlett and Don Shaw -- Misha Hoekstra * The Riveter *
This beautifully atmospheric novel, set on a small island off Norway, where weather and the power of the sea shape lives, is a compelling story of one family, generations of which have lived on the island that bears the family name. -- Books of the Year * Glasgow Herald. *
A beautiful and rich depiction of place and of family life . . . an outstanding achievement. * New European, Books of the Year. *

GOR008450432
The Unseen: SHORTLISTED FOR THE MAN BOOKER INTERNATIONAL PRIZE 2017 by Roy Jacobsen
Roy Jacobsen
Used - Like New
Paperback
Quercus Publishing
2017-05-15
272
1848666101
9781848666108
Short-listed for Man Booker International Prize 2017
Book picture is for illustrative purposes only, actual binding, cover or edition may vary.
The book has been read, but looks new. The book cover has no visible wear, and the dust jacket is included if applicable. No missing or damaged pages, no tears, possible very minimal creasing, no underlining or highlighting of text, and no writing in the margins.