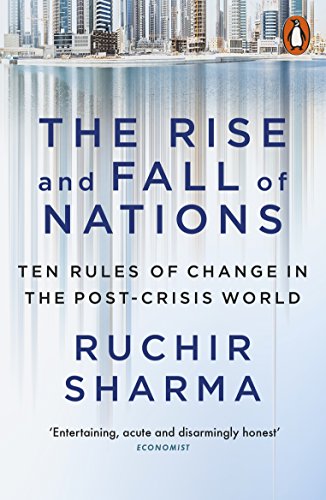 The Rise and Fall of Nations
by Ruchir Sharma

The Rise and Fall of Nations Summary

The Rise and Fall of Nations: Ten Rules of Change in the Post-Crisis World by Ruchir Sharma

The crisis of 2008 ended the illusion of a golden era in which many people imagined that prosperity and political calm would continue to spread indefinitely. In a world now racked by slowing growth and mounting unrest, how can we discern which nations will thrive and which will fail?

Shaped by prize-winning author Ruchir Sharma's twenty-five years travelling the world, The Rise and Fall of Nations rethinks economics as a practical art. By narrowing down the thousands of factors that can shape a country's future, it spells out ten clear rules for identifying the next big winners and losers in the global economy.

'The nub of the book is how to spot which countries are likely to succeed, and which to fail, in this impermanent world. Sharma offers a framework of 10 rules. The more of these rules countries achieve, the more they are likely to rise rather than fall ... it may just help you avoid picking losers' David Smith, Sunday Times

'As ambitious as it is well executed ... a mix of humble pragmatism and daring decisiveness' Reuters

The Rise and Fall of Nations Reviews

Filled with amazing data ... fascinating insights and revealing anecdotes, this is quite simply the best guide to the global economy today. Whether you are an observer or an investor, you cannot afford to ignore it. -- Fareed Zakaria
A fine guide to the great emerging market boom and bust. * The Economist *
Sharma's wealth of knowledge ... and ample experience on the ground are strong foundations for his exploration of what makes economies break out, or break down. * Reuters *
For sheer readability and insight on the developing world drama, I dare say you won't find a better choice. * Wall Street Journal *
A vital guide to the new economic order. -- Rana Foroohar * Time *

Ruchir Sharma is Head of Emerging Markets and Chief Global Strategist at Morgan Stanley Investment Management. His acclaimed book, Breakout Nations: In Pursuit of the Next Economic Miracles (2012), was an international bestseller. Sharma began his career as a writer and still contributes regularly to the Wall Street Journal, Financial Times, Foreign Affairs and other publications. One of the world's largest investors, he was named one of Foreign Affairs' Top Global Thinkers in 2012 and one of Bloomberg Market's 50 most influential thinkers in 2015.

GOR008786568
The Rise and Fall of Nations: Ten Rules of Change in the Post-Crisis World by Ruchir Sharma
Ruchir Sharma
Used - Very Good
Paperback
Penguin Books Ltd
2017-06-13
480
0141980702
9780141980706
N/A
Book picture is for illustrative purposes only, actual binding, cover or edition may vary.
This is a used book - there is no escaping the fact it has been read by someone else and it will show signs of wear and previous use. Overall we expect it to be in very good condition, but if you are not entirely satisfied please get in touch with us.