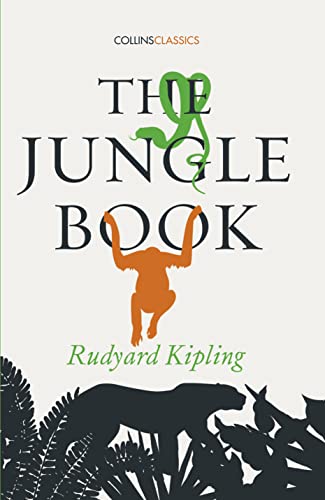 The Jungle Book
by Rudyard Kipling

HarperCollins is proud to present its range of best-loved, essential classics.

HarperCollins is proud to present its range of best-loved, essential classics.

`The man's cub is mine, Lungri - mine to me! He shall not be killed. He shall live to run with the Pack and to hunt with the Pack; and in the end, look you, hunter of little naked cubs - frog-eater - fish-killer - he shall hunt thee!'

Mowgli, the man-cub, is raised in the Indian jungle by a pack of wolves. As he grows older, he learns the `Law of the Jungle' with the help of his friends, Bagheera the Panther, Baloo the Bear and Kaa the Python, who try to keep him safe from fearsome Shere Khan, the tiger. Eventually he comes into contact with his own kind, and begins to question his very nature.

One of the greatest myths ever told, and the subject of numerous film adaptations, The Jungle Book is Rudyard Kipling's best-known work. Drawing on his own childhood spent in India, as well as ancient fables, these stories of good and evil, and man and nature, have captivated readers for generations.

Rudyard Kipling (1865-1936) was a novelist, short-story writer and poet. He is best known for his tales of India, where he was born and spent his early childhood, and to which he returned as a young man in 1882, before leaving for London in 1889. He was award the Nobel Prize for Literature in 1907.

GOR007558472
The Jungle Book (Collins Classics) by Rudyard Kipling
Rudyard Kipling
Collins Classics
Used - Very Good
Paperback
HarperCollins Publishers
2016-02-22
208
0008182302
9780008182304
N/A
Book picture is for illustrative purposes only, actual binding, cover or edition may vary.
This is a used book - there is no escaping the fact it has been read by someone else and it will show signs of wear and previous use. Overall we expect it to be in very good condition, but if you are not entirely satisfied please get in touch with us.