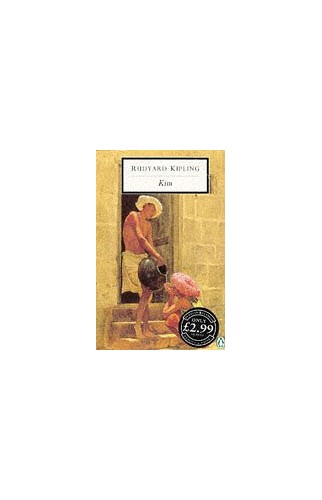 In Stock
£3.99
Kim, an Irish orphan, accompanies a holy man on his journey throughout India and his quest for a mystical river.
Like New Very Good
Only 1 left

Kim is an orphan, living from hand to mouth in the teeming streets of Lahore. One day he meets a man quite unlike anything in his wide experience, a Tibetan lama on a quest. Kim's life suddenly acquires meaning and purpose as he becomes the lama's guide and protector--his chela. Other forces are at work as Kim is sucked into the intrigue of the Great Game and travels the Grand Trunk Road with his lama.

How Kim and the lama meet their respective destinies on the road and in the mountains of India forms one of the most compelling adventure tales of all time.

Rudyard Kipling was born in Bombay in 1865. During his time at the United Services College, he began to write poetry, privately publishing Schoolboy Lyrics in 1881. The following year he started work as a journalist in India, and while there produced a body of work, stories, sketches, and poems --including "Mandalay," "Gunga Din," and "Danny Deever"--which made him an instant literary celebrity when he returned to England in 1889. While living in Vermont with his wife, an American, Kipling wrote The Jungle Books, Just So Stories, and Kim--which became widely regarded as his greatest long work, putting him high among the chronicles of British expansion. Kipling returned to England in 1902, but he continued to travel widely and write, though he never enjoyed the literary esteem of his early years. In 1907, he became the first British writer to be awarded the Nobel Prize. He died in 1936

Edward W. Said is University Professor at Columbia, where he has taught English and Comparative Literature since 1963. His books include "Joseph Conrad and the Fiction of Autobiography"; "Beginnings; Intention and Method"; "The Question of Palestine; Literature and Society; The World," "the Text and the Critic; Covering Islam"; "Orientalism; After the Last Sky; Blaming the Victim"; "Musical Elaborations; Culture and Imperialism"; "Representations of the Intellectual"; "Out of Place: A Memoir; The End of the Peace Process"; "Oslo and After and Peace and Its Dicontents: Gaza to Jericho 1993-1995."

GOR010549893
Kim by Rudyard Kipling
Rudyard Kipling
Twentieth Century Classics S.
Used - Like New
Paperback
Penguin Books Ltd
1989-12-07
368
0140183523
9780140183528
N/A
Book picture is for illustrative purposes only, actual binding, cover or edition may vary.
The book has been read, but looks new. The book cover has no visible wear, and the dust jacket is included if applicable. No missing or damaged pages, no tears, possible very minimal creasing, no underlining or highlighting of text, and no writing in the margins.