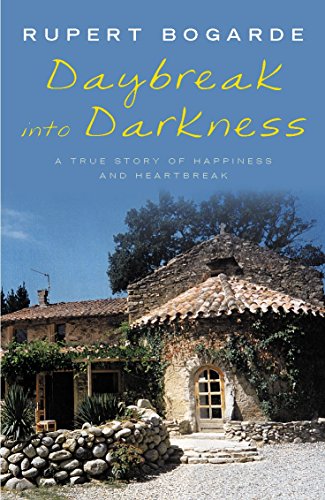 Daybreak into Darkness by Rupert Bogarde

If somebody had said to me, "Your wife will go mad, she'll go missing, you'll end up bringing up your children alone, you're going to search for her for years and years," I would have thought they were the ones going insane.

Daybreak into Darkness: A True Story of Happiness and Heart by Rupert Bogarde

At the age of twenty-one, shy Rupert Bogarde fell in love with a nurse a great deal more worldly than he. Jacquie loved France and the couple moved there, married and bought a ruined chapel near Perpignan to turn into a business. Juggling restoration and building work with odd jobs, they eventually opened a holiday centre for young diabetics. With the birth of their two sons their dream should have been complete, but Jacquie had become obsessed with the business - working and partying for days and nights without sleep - while Rupert struggled to keep his family and marriage together.

Jacquie's mania became alarming, until one evening she disappeared. Rupert, by now heavily in debt, was left alone with the children and a business in ruins. Her car was later found crashed and abandoned by the roadside and Rupert soon became the French police's number one suspect. He looked for her for years, learning to live with people's assumptions that he was responsible for Jacquie's disappearance. Then in 2000, seven years after Jacquie's disappearance, he finally discovered the truth.

'Unsparing in its raw honesty' You Magazine

'A story that lingers in the reader's consciousness, haunting through its wider possibilities' Independent on Sunday

'Unsparing in its raw honesty' You Magazine
Rupert van den Bogaerde was born in Sussex. Since returning to England in 1993 he has remarried and lives with his wife and five children in Hampshire.
GOR003387037
9780330487894
0330487892
Daybreak into Darkness: A True Story of Happiness and Heart by Rupert Bogarde
Rupert Bogarde
Used - Very Good
Paperback
Pan Macmillan
2003-05-02
400
N/A
Book picture is for illustrative purposes only, actual binding, cover or edition may vary.
This is a used book - there is no escaping the fact it has been read by someone else and it will show signs of wear and previous use. Overall we expect it to be in very good condition, but if you are not entirely satisfied please get in touch with us
Trustpilot