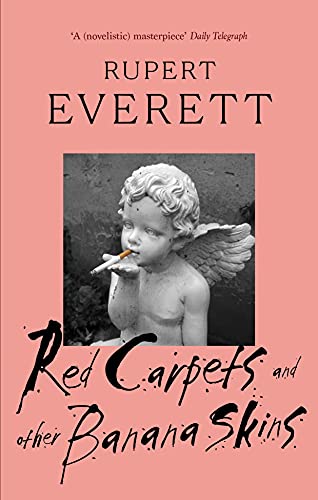 Red Carpets And Other Banana Skins
by Rupert Everett

In Stock
£5.99
* A truly remarkable book - a warm, witty and sophisticated memoir from one of our most intriguing and articulate stars
Very Good Good
9 in stock

Red Carpets And Other Banana Skins by Rupert Everett

An element of drama has always attended Rupert Everett, even before he swept to fame with his outstanding performance in 'Another Country'. He has spent his life surrounded by extraordinary people, and witnessed extraordinary events. He was in Moscow during the fall of communism; in Berlin the night the wall came down; and in downtown Manhattan on September 11th. By the age of 17 he was friends with Andy Warhol and Bianca Jagger, and since then he has been up close and personal with some of the most famous women in the world: Julia Roberts, Madonna, Sharon Stone and Donatella Versace.

Whether sweeping the floor for the Royal Shakespeare Company or co-starring with Faye Dunaway and an orang-utan in 'Dunstan Checks In' (they both took ages to get ready), Rupert Everett always brings as much energy and talent to his life as he does to his career.

A superb raconteur and a keen observer of human folly (especially his own), Rupert Everett turns his life into a captivating story of love, fame, glamour, gossip and drama.

Praise for Red Carpets and Other Banana Skins

'He has an almost fanatical loyalty to the concept of enjoyment, to the detriment, it might be argued, of his art, though to the great enrichment of his being; and for Rupert, as he makes clear in this continuously brilliant memoir, the best theatrical autobiography since Noel Coward's Present Indicative, acting is being...a superb and unexpectedly inspiring achievement' Simon Callow, Guardian

You don't need to be a soothsayer to know that, amidst the volcanic spew of fourth-rate celebrity memoirs launched this autumn, only one will be worth the paper it's printed on. I was salivating over my toast and marmalade at last week's serialisation of Rupert Everett's exemplary stab at the genre, Red Carpets and Other Banana Skins * Rowan Pelling, INDEPENDENT ON SUNDAY *
Hilariously honest. . . a kind of rake's progress. The accounts of filming with stars such as Madonna, Sharon Stone and Julia Roberts are as good as Evelyn Waugh. The earlier scenes from childhood to unruly adolescence, to drama school and a belle epoque * DAILY MAIL *
The most keenly awaited celebrity autobiography is Rupert Everett's RED CARPETS AND OTHER BANANA SKINS, an urbane charmer in the manner David Niven's THE MOON'S A BALLOON * John O'Connell's, TIME OUT *

Rupert Everett first rose to fame in Another Country. Since then he has appeared in countless films and plays, including Shakespeare in Love, My Best Friend's Wedding, An Ideal Husband and The Importance of Being Earnest. He played Oscar Wilde in The Judas Kiss to rave reviews. His first memoir, Red Carpets and Other Banana Skins, was a Sunday Times bestseller. His second, Vanished Years, has also become a classic, and won the Sheridan Morley prize for best biography in 2013.

GOR000360535
Red Carpets And Other Banana Skins by Rupert Everett
Rupert Everett
Used - Very Good
Paperback
Little, Brown Book Group
2007-07-05
416
0349120587
9780349120584
Winner of Richard & Judy Book Club 2006 (UK) Short-listed for PEN Ackerley Prize 2007 (UK)
Book picture is for illustrative purposes only, actual binding, cover or edition may vary.
This is a used book - there is no escaping the fact it has been read by someone else and it will show signs of wear and previous use. Overall we expect it to be in very good condition, but if you are not entirely satisfied please get in touch with us.