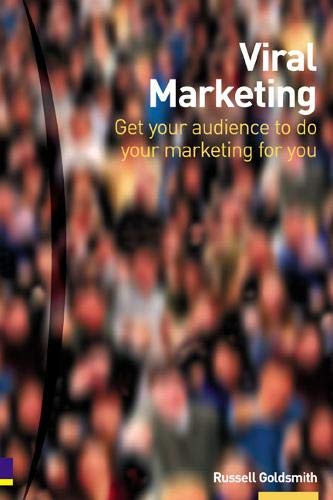 Viral marketing is hot. This is the first practical, informal, informative, easy-read guide to explain what it is, how to do it and how to measure success.

Viral Marketing: Get Your Audience to Do Your Marketing For You by Russell Goldsmith

Email is a very powerful, all reaching medium. Get your message right and your friends and customers will do your work for you. They can forward on your message, your brand, your product name - and begin a process that could reach millions around the world.

But what, if any, are the rules? It's not easy to get it right when so far there hasn't been much information on what works. Viral marketing is THE marketing buzzword. So what's it all about? How does it work? How did it all start? How effective is it? When is viral marketing appropriate? Who has succeeded? How can we learn from those who have succeeded and those who have failed?

These are just some of the questions answered in viral marketing. It also provides an understanding of what it is about people that makes them want to pass on an email to a friend or colleague - and how to ensure they do so for your benefit.

"this book shows how powerful viral marketing can be"

"Perhaps the best recommendation for more attention to viral marketing is that customers really like it when done well. Simply, it makes life easier and more interesting."

Russell Goldsmith is Director and Head of New Media at Market Tiers 4DC. He is a frequent speaker on the subject of new marketing techniques and viral marketing in particular.

GOR009963332
Viral Marketing: Get Your Audience to Do Your Marketing For You by Russell Goldsmith
Russell Goldsmith
Used - Like New
Paperback
Pearson Education Limited
2002-07-08
144
0273659057
9780273659051
N/A
Book picture is for illustrative purposes only, actual binding, cover or edition may vary.
This is a used book - there is no escaping the fact it has been read by someone else and it will show signs of wear and previous use. Overall we expect it to be in very good condition, but if you are not entirely satisfied please get in touch with us.