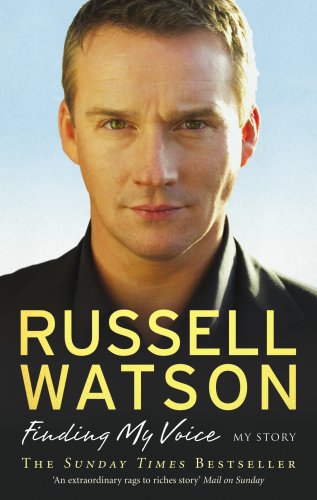 Finding My Voice
by Russell Watson

In Stock
£3.99
Russell 'The Voice' Watson is a star with a real story to tell. While most stars of today find success early, Russell was still working in a Salford factory at the age of 30.
Very Good Good
7 in stock

Finding My Voice by Russell Watson

Russell 'The Voice' Watson is a star with a real story to tell. While most stars of today find success early, Russell was still working in a Salford factory at the age of 30. He spent the evenings singing in working men's clubs for extra cash to keep the bailiffs from his family's door. The chairman of Manchester United gave him his big break in May 1999: the opportunity to sing at Old Trafford. His extraordinary performance was quickly followed by a record deal and his phenomenal debut album. Despite his outward success, Russell struggled with his health and family life. His rapid rise to fame led to a bitter divorce from his childhood sweetheart and his private life being splashed across the tabloids. Then last year he was struck down by a life-threatening brain tumour. This plunged Russell into a deep depression and it was only the thought of leaving his two children fatherless that kept him going. Just when it seemed he was fully recovered he collapsed again while recording and had to have emergency surgery on a second brain tumour that threatened his voice, his sight and his life. Now, in his own words, Russell tells us the amazing story of his life.

Russell Watson was born in Salford, Lancashire, in 1966. He has sold over five million albums, won four BRIT awards, embarked on numerous sell-out world tours and entertained the Pope, Blair, Bush and the Emperor of Japan. He has two young daughters, Rebecca and Hannah.

GOR001171909
Finding My Voice by Russell Watson
Russell Watson
Used - Very Good
Paperback
Ebury Publishing
2009-03-05
368
009192331X
9780091923310
N/A
Book picture is for illustrative purposes only, actual binding, cover or edition may vary.
This is a used book - there is no escaping the fact it has been read by someone else and it will show signs of wear and previous use. Overall we expect it to be in very good condition, but if you are not entirely satisfied please get in touch with us.