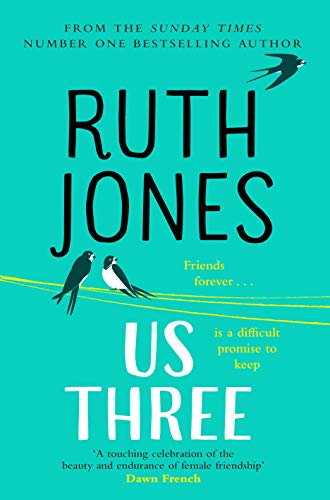 Us Three
by Ruth Jones

Us Three by Ruth Jones

'A touching celebration of the beauty and endurance of female friendship. There is nothing mightier. Fact.' DAWN FRENCH

The new novel from Ruth Jones, co-creator of Gavin & Stacey and author of the smash-hit, number one bestselling debut, Never Greener.

Friends forever is a difficult promise to keep...

Meet Lana, Judith and Catrin. Best friends since primary school when they swore an oath on a Curly Wurly wrapper that they would always be there for each other, come what may.

After the trip of a lifetime, the three girls are closer than ever. But an unexpected turn of events shakes the foundation of their friendship to its core, leaving their future in doubt - there's simply too much to forgive, let alone forget. An innocent childhood promise they once made now seems impossible to keep . . .

Packed with all the heart and empathy that made Ruth's name as a screenwriter and now author, Us Three is a funny, moving and uplifting novel about life's complications, the power of friendship and how it defines us all.

Praise for Us Three:

'This novel oozes warmth and honesty. A big-hearted book that provides a cast of characters you'll lose your heart to.' ADELE PARKS

'I loved this brilliantly gripping depiction of the complexities of female friendship over the years. Love, betrayal, comedy and loss - Us Three has it all.' FIONA NEILL

'This is honestly one of the best books I have read this year! I absolutely devoured it within a few hours & once I had started, I just couldn't stop until I had turned the last page.'

'I love the way Ruth Jones writes. The relationship between the 3 friends is perfect and a wonderful book to read about friendship'

A poignant novel about friendship and forgiveness . . . with fantastic characterisation, as you'd expect from the co-creator of Gavin & Stacey, it's an epic journey * Woman & Home *
Us Three is a warm, smart, uplifting tale of true friendship. I loved Lana, Catrin and Judith - I was genuinely sad to leave them when I turned the final page. * Beth O'Leary, bestselling author of THE FLATSHARE *
A touching celebration of the beauty and endurance of female friendship. There is nothing mightier. Fact. * Dawn French *
This novel oozes warmth and honesty. A big-hearted book that provides a cast of characters you'll lose your heart to. * Adele Parks *
This moving story of three Welsh friends-for-life . . . balances warmth and humour with bleakness and despair. Another winner for Gavin and Stacey star Jones * Daily Mail *
A funny, moving and uplifting novel * The Sun *
A funny and warm tale of friendship * Evening Standard *
I loved spending time immersed in Catrin, Judith and Lana's lives . . . A contender for my Books of the Year list * Prima *
A wonderfully warm, funny, totally engrossing and unputdownable novel about friendship. A gorgeous treat. * Kate Eberlen, bestselling author of MISS YOU *
I loved this brilliantly gripping depiction of the complexities of female friendship over the years. Love, betrayal, comedy and loss - Us Three has it all. * Fiona Neill *

Ruth Jones is best known for her outstanding and award-winning television writing, most notably BBC 1's Gavin and Stacey, which she co-wrote with James Corden and in which she played the incorrigible Nessa Jenkins. The most recent Christmas Day special of Gavin and Stacey gained national critical acclaim, drawing an audience of over 18 million and winning a National Television Award for Impact. Ruth also created and co-wrote Sky 1's Stella, which ran for six series. As well as being Bafta-nominated for her role as the eponymous Stella, Ruth has also starred in several other television comedies and dramas.

Her debut novel Never Greener has now sold over a quarter of a million copies. It was chosen as WHSmith Fiction Book of the Year 2018, was a Zoe Ball Book Club pick, and was a Sunday Times bestseller for fifteen weeks, three weeks at number one. Us Three is Ruth's second novel.

GOR010783567
Us Three by Ruth Jones
Ruth Jones
Used - Very Good
Hardback
Transworld Publishers Ltd
2020-09-03
384
1787632253
9781787632257
N/A
Book picture is for illustrative purposes only, actual binding, cover or edition may vary.
This is a used book - there is no escaping the fact it has been read by someone else and it will show signs of wear and previous use. Overall we expect it to be in very good condition, but if you are not entirely satisfied please get in touch with us.