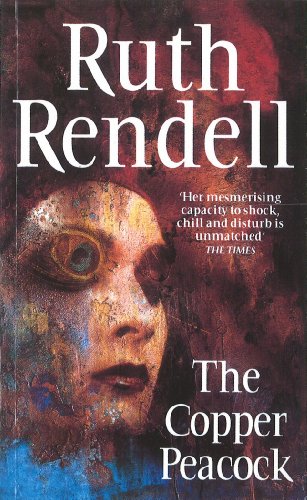 The Copper Peacock
by Ruth Rendell

In Stock
£3.29
The Copper Peacock: a hideous bookmark given to Bernard, a writer, by his attractive cleaning lady, Judy. She had brought order to a hitherto chaotic life, but now the bookmark destroys all this, shattering his razor sharp sensibilities.
Very Good
10 in stock

The Copper Peacock by Ruth Rendell

The Copper Peacock: a hideous bookmark given to Bernard, a writer, by his attractive cleaning lady, Judy. She had brought order to a hitherto chaotic life, but now the bookmark destroys all this, shattering his razor sharp sensibilities. If only she had given herself, then she might have lived... In this, and eight other landmark short stories, including the Wexford tale An Unwanted Woman, Ruth Rendell once again proves she is the mistress of crime and mystery genres.

"Rendell's psychological insights are so absorbing, it's easy to forget what a superb plotter she is" * The Times *
"The most brilliant mystery novelist of our time" * Patricia Cornwell *
"One of the greatest novelists presently at work in our language... A writer whose work should be read by anyone who either enjoys a brilliant mystery - or distinguished literature" * Scott Turow *

GOR004687983
The Copper Peacock by Ruth Rendell
Ruth Rendell
Used - Very Good
Paperback
Cornerstone
1994-04-21
176
0099928302
9780099928300
N/A
Book picture is for illustrative purposes only, actual binding, cover or edition may vary.
This is a used book - there is no escaping the fact it has been read by someone else and it will show signs of wear and previous use. Overall we expect it to be in very good condition, but if you are not entirely satisfied please get in touch with us.