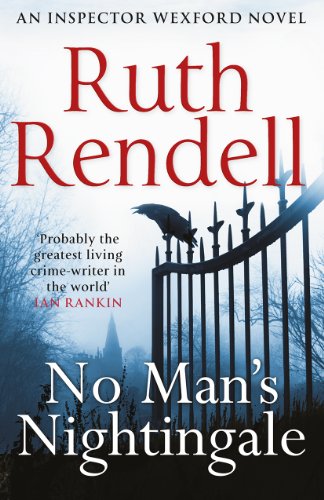 No Man's Nightingale
by Ruth Rendell

Used Price
£2.99
New RRP £9.99
Free Shipping in the UK
No Man's Nightingale: the eagerly anticipated twenty-fourth title in Ruth Rendell's bestselling Detective Chief Inspector Wexford series. And is anyone else in Kingsmarkham in danger?What Wexford doesn't know is that the killer is far closer than he, or anyone else, thinks.
Reviews:
Trustpilot
Very Good

No Man's Nightingale: (A Wexford Case) by Ruth Rendell

No Man's Nightingale: the eagerly anticipated twenty-fourth title in Ruth Rendell's bestselling Detective Chief Inspector Wexford series. The woman vicar of St Peter's Church may not be popular among the community of Kingsmarkham. But it still comes as a profound shock when she is found strangled in her vicarage. Inspector Wexford is retired, but he retains a relish for solving mysteries especially when they are as close to home as this one is. So when he's asked whether he will assist on the case, he readily agrees. But why did the vicar die? And is anyone else in Kingsmarkham in danger? What Wexford doesn't know is that the killer is far closer than he, or anyone else, thinks.

"With every page, Rendell reminds us why she is the doyenne of murder mystery and still absolutely at the top of her game." * Birmingham Post *
"[A] wry and twisty mystery - a joy to read." * Evening Standard *

GOR005860393
No Man's Nightingale: (A Wexford Case) by Ruth Rendell
Ruth Rendell
Wexford
Used - Very Good
Paperback
Cornerstone
2014-07-01
352
0099585855
9780099585855
N/A
Book picture is for illustrative purposes only, actual binding, cover or edition may vary.
This is a used book - there is no escaping the fact it has been read by someone else and it will show signs of wear and previous use. Overall we expect it to be in very good condition, but if you are not entirely satisfied please get in touch with us.