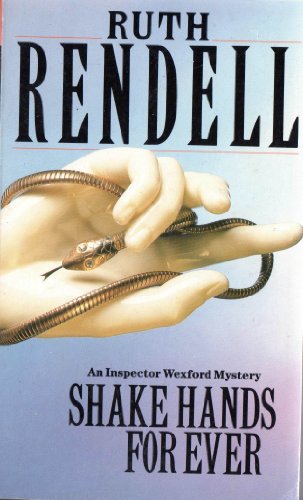 Shake Hands For Ever
by Ruth Rendell

In Stock
£5.99
A Reg Wexford mystery. The Chief Inspector could discover no motive, no reason and no suspect for Mrs Hathall's daughter-in-law's murder - all he had were his own intuitive suspicions. Probably Angela Hathall really had picked up a stranger, and that stranger had killed her. But why the doubt?
Very Good Good
Only 4 left

Shake Hands For Ever Summary

Shake Hands For Ever by Ruth Rendell

The ninth book to feature the classic crime-solving Detective Chief Inspector Wexford. Most people would have screamed. Mrs Hathall made no sound. She had seen death many times before, but she had never before seen a death by violence. Heavily, she plodded across the room and descended the stairs to where her son waited. 'There's been an accident,' she said. 'Your wife's dead.' Chief Inspector Wexford could discover no motive, no reason, no suspect - al he had were his own intuitive suspicions. Probably he was reading meaning where there was none; probably Angela Hathall really had picked up a stranger, and that stranger had killed her. But why such doubt? Was Wexford becoming cynical and untrusting - or was this simply one of the most ingenious crimes he had ever tackled?

Shake Hands For Ever Reviews

Ruth Rendell is the Queen of British crime writing. The author of over 50 novels, she has won many significant crime fiction awards. Her first novel, From Doon With Death, appeared in 1964, and since then her reputation and readership have grown steadily with each new book. She has received major awards for her work; three Edgars from the Mystery Writers of America; the Crime Writers' Gold Dagger Award for 1976's best crime novel, A Demon in My View; the Arts Council National Book Award for Genre Fiction in 1981 for The Lake of Darkness; the Crime Writer's Gold Dagger Award for 1986's best crime book for Live Flesh; in 1987 the Crime Writer's Gold Dagger Award for A Fatal Inversion and in 1991 the same award for King Solomon's Carpet, both written under the pseudonym Barbara Vine; the Sunday Times Literary Award in 1990; and in 1991 the Crime Writer's Cartier Diamond Award for outstanding contribution to the crime fiction genre. Her books are translated into 21 languages. In 1996 she was awarded the CBE and in 1997 became a Life Peer.

GOR004966420
Shake Hands For Ever by Ruth Rendell
Ruth Rendell
Used - Very Good
Paperback
Cornerstone
1985-08-22
224
B008LP3FYE
9780099129103
N/A
Book picture is for illustrative purposes only, actual binding, cover or edition may vary.
This is a used book - there is no escaping the fact it has been read by someone else and it will show signs of wear and previous use. Overall we expect it to be in very good condition, but if you are not entirely satisfied please get in touch with us.