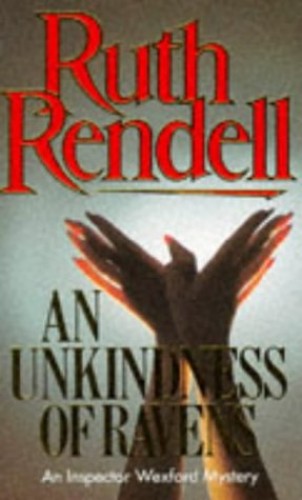 An Unkindness Of Ravens
by Ruth Rendell

In Stock
£3.99
The thirteenth book to feature the classic crime-solving detective, Chief Inspector Wexford.Rodney Williams was neither handsome nor wealthy - but he had an unerring eye for a pretty girl and when he disappeared and two other men were later attacked by a young woman, Wexford couldn't help wondering if there was a connection.
Very Good Good
7 in stock

An Unkindness Of Ravens Summary

An Unkindness Of Ravens: (A Wexford Case) by Ruth Rendell

The thirteenth book to feature the classic crime-solving detective, Chief Inspector Wexford. The raven: not a particularly predatory bird, but far from soft and submissive, adopted as the symbol of a militant feminist group... Detective Chief Inspector Wexford thought he was merely doing a neighbourly good deed when he agreed to talk to Joy Williams about her missing husband. He certainly didn't expect to be investigating a most unusual homicide. Rodney Williams was neither handsome nor wealthy - but he had an unerring eye for a pretty girl and when he disappeared and two other men were later attacked by a young woman, Wexford couldn't help wondering if there was a connection. If there wasn't, where was Rodney Williams and why had he vanished? He had committed no crime - apart from telling his wife the occasional lie...

An Unkindness Of Ravens Reviews

"A brilliant reshuffling of a pack of clues . . . Rendell at her richest" * Sunday Times *
"Well-plotted . . . baffling . . . Still the tops" * Sunday Telegraph *
"A climax as chilling and unexpected as any she's perpetrated before" * The Times *

GOR000491229
An Unkindness Of Ravens: (A Wexford Case) by Ruth Rendell
Ruth Rendell
Wexford
Used - Very Good
Paperback
Cornerstone
1986-03-06
272
0099450704
9780099450702
N/A
Book picture is for illustrative purposes only, actual binding, cover or edition may vary.
This is a used book - there is no escaping the fact it has been read by someone else and it will show signs of wear and previous use. Overall we expect it to be in very good condition, but if you are not entirely satisfied please get in touch with us.